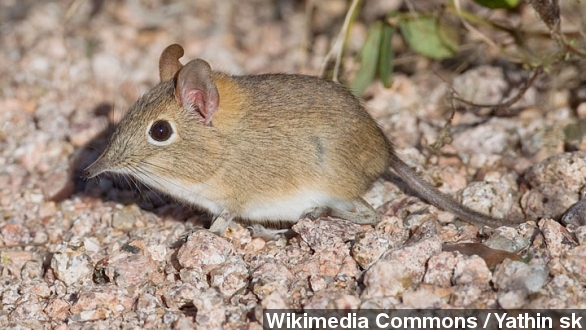 By Jasmine Bailey
June 27, 2014
Researchers from California discovered a new type of elephant shrew that is more closely related to actual elephants than shrews.
SHOW TRANSCRIPT

For the record, they really are not the best of friends. (Via Discovery)

And unfortunately for terrified elephants everywhere, scientists have discovered a little mammal with a striking resemblance to a mouse is actually a distant cousin of the gentle giants. (Via KYW-TV)

"It's official name is the Macroscelides micus, it's a new species of elephant shrew and the world may never have know about it if Galen Rathbun didn't stumble over it." (Via KTKA)

... ran into the little guy while walking through a remote desert in Namibia. (Via Google Earth)

According to the academy's press release only about a dozen new species of mammals are discovered every year — which highlight the importance of this finding.

And the Academy’s Curator of Ornithology and Mammalogy explained how past discoveries played a huge role, "Several museum collections were instrumental in determining that what we had was truly new to science, highlighting the value of collections for this type of work. ... It’s exciting to think that there are still areas of the world where even the mammal fauna is unknown and waiting to be explored.”

Macroscelides micus is actually quite different from other elephant shrews, on a genetic level. (Via Wikimedia Commons / Elias Neideck)

"They're actually more closely related to elephants then they are to shrews or mice." (Via KRGV)

According to researchers it eats insects similar to an ant eater and is monogamous, which researchers say is unusual for mammals. Oh yeah, how could we forget that trunk. Well, it kind of makes for a cute family picture. (Via Wikimedia Commons / Yathin sk, Thomas Breuer)

Maybe the two will learn to get a long, ya know — for the sake of the family.