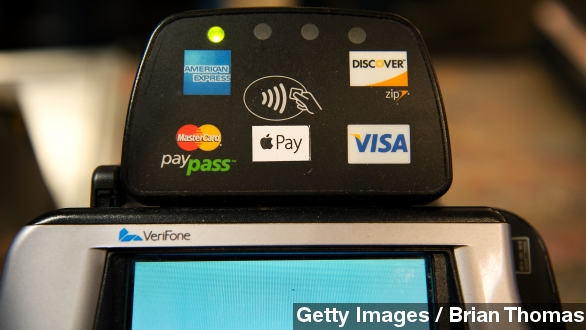 Welcome to the future, a world where you can pay for your parking violations using Apple Pay or even Bitcoin.

According to MarketWatch, the city of New York is pondering alternative payment methods for the roughly 10 million tickets it issues each year.

The outlet says New York’s finance department is hoping to reduce the number of fines its patrons garner by making it easier for them to pay those fines.

That’s a pretty nice gesture for people who are, you know, breaking the law. And new payment methods alone aren’t enough to make things easier. The city’s also looking into introducing a new payment system.

Much like the way some banks allow their customers to snap photos of checks to deposit them, the system would allow violators to scan in their ticket and pay up all from their phone. (Video via Citi)

It’s important to note, however, it could be a while before New Yorkers are able to use their phones to right their wrongs.

The city’s Department of Finance has only submitted a Request for Information, meaning it’s just exploring the possibility of one day accepting new payment methods.

Still, a pat on the back from a big city like New York only bodes well for Apple Pay and struggling cryptocurrency Bitcoin. (Video via Mashable)

While Apple Pay and Google Wallet are slowly growing in popularity, Bitcoin was recently named the worst currency of 2014 by Bloomberg, so a nod from NYC could help.

As a writer for Ars Technica reminds us, this is only one of many tech-forward plans from the Big Apple. It announced plans to offer free public Wi-Fi and provide Wi-Fi rentals to those without Internet.

With the number of parking tickets I seem to procure, maybe I should consider moving to New York.