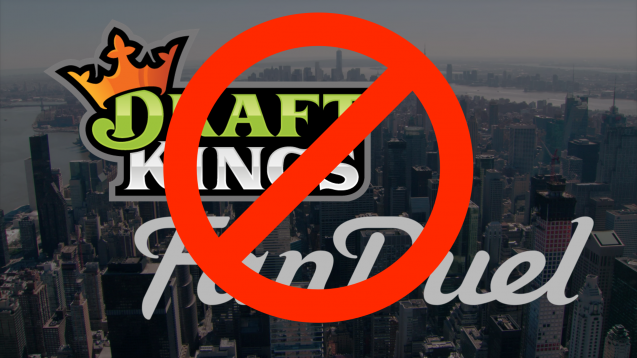 Daily fantasy sports sites DraftKings and FanDuel were briefly ordered to stop operating in New York by the state's Supreme Court while it's determined if the games are illegal gambling. However, an appeals court allowed both sites to continue business while another ruling is pending.

An operational ban would be a major blow to the sites: 12.8 percent of all daily fantasy sports players live in New York, according to stats from Eilers Research cited by multiple outlets. (Video via DraftKings)

DraftKings and FanDuel argue they are games of skill, not chance, and shouldn't be regulated like the gambling industry. The sites had been using a 2006 law, which protects traditional fantasy sports, to get by. (Video via FanDuel)

The sites allow players to pay to enter daily leagues where they draft a fantasy sports team to potentially win real-life prizes. (Video via FanDuel)

According to ESPN, in a single weekend in October, DraftKings gave out $22.4 million in prizes and kept $2.6 million in profits.

New York State Attorney General Eric Schneiderman said the leagues amount to gambling, since players are "placing bets on events outside of their control or influence."

Both sites plan to appeal the ruling. There's already a federal investigation into daily fantasy sports, and the industry is starting to face more scrutiny from certain states as well.