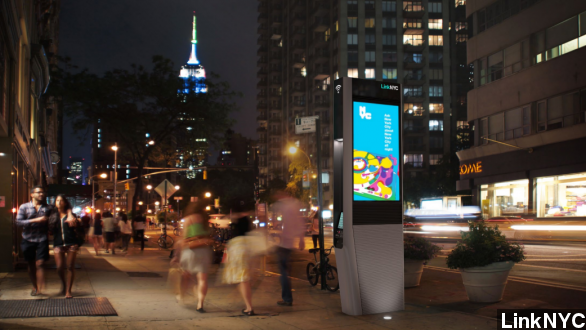 Well, pay phones of New York, it was a good run.

Monday the Big Apple announced it's ditching its coin-operated relics of the early 1900s in favor of a more modern solution.

The project, called LinkNYC, will replace pay phones in New York City's five boroughs with high-tech Wi-Fi kiosks. It's is a joint effort by city and CityBridge, a consortium of technology, design and advertising companies.

The kiosks will boast a variety of features including free, 24/7 Internet access at gigabit speeds, an Android tablet touch screen and free charging.

According to the city's press release, the new terminals will generate more than $500 million in ad revenue for the city over the next 12 years and won't cost the city's inhabitants a cent.

On top of all this, the project claims it'll be one of the first free municipal Wi-Fi services in the U.S. to offer encryption, creating "the most robust and forward-thinking privacy policy" that is currently available.

All right, so what's the catch here? Well, most people's concerns seem to lie with privacy — even with the project's mention of added security.

Specifically, a BuzzFeed report from earlier in October that revealed an outdoor advertising agency placed about 500 Bluetooth tracking "beacons" inside phone booths throughout the city.

That same company, Titan, is listed as a member of the LinkNYC project.

Speaking to Vice's Motherboard, the executive director of the advocacy group NYCwireless said: "I think they learned a lot from the beacon controversy and my sense is that the city is trying to be very focused and up-front about privacy issues. But it's worth noting that none of the privacy policies have been published yet."

And there's always the question of what'll happen when the city's more ... unsanitary denizens decide to treat the kiosks like they did the phone booths.

PETE IZZO JR. VIA MASHABLE: "Right around this level is where it starts to corrode. This is usually due to both humans and dogs urinating frequently on the pedestal."

For those who're worried about where Supermen of the future will change into their costumes, don't worry: CityBridge will apparently leave three existing pay phones in place. And we're not joking. Superman is the reason. Nostalgia lives.

This video includes images from Getty Images and LinkNYC.