New Year Means New Prices On The Things You Love 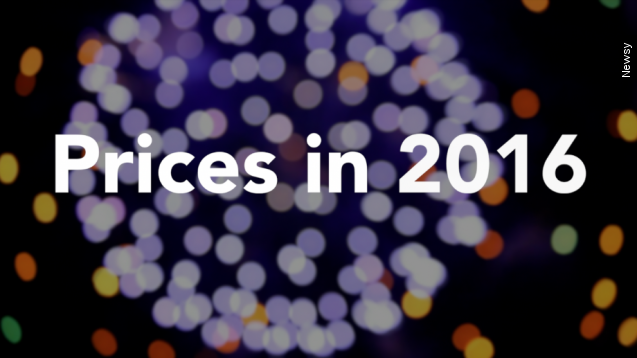 SMS
New Year Means New Prices On The Things You Love
By Jamal Andress
By Jamal Andress
December 28, 2015
Prices for some things are going up in 2016, but other prices will drop. Netflix will be more expensive, but coffee is expected to be cheaper.
SHOW TRANSCRIPT

As 2015 draws to a close, economists and financial analysts are trying to predict what 2016 will look like — and it seems the prices of everything from Netflix to avocados could be changing in the new year.

One change that should perk up all the early risers: a dip in coffee prices. People around the world are consuming more coffee than ever before, and lucky for them, prices are expected to drop by nearly 6 percent in 2016.

On the other hand, ordering extra guac at Chipotle could get expensive. KSEE reports avocado prices are expected to jump 30 percent, with many industry experts blaming California's persistent drought. (Video via Chipotle)

Speaking of Chipotle, another millennial favorite just got more expensive.

In October, Netflix announced it was raising the price of its standard plan one dollar to $9.99. But Netflix members who signed up prior to the announcement won't see the increase until October 2016. (Video via Netflix)

One thing that's not going up is gas prices. The historically low gas prices this year seem to be here to stay. According to AAA, the lower prices have saved Americans more than $550 per driver, or to put that another way, $115 billion total.