To Make Prostheses Better, They Have To Talk Back 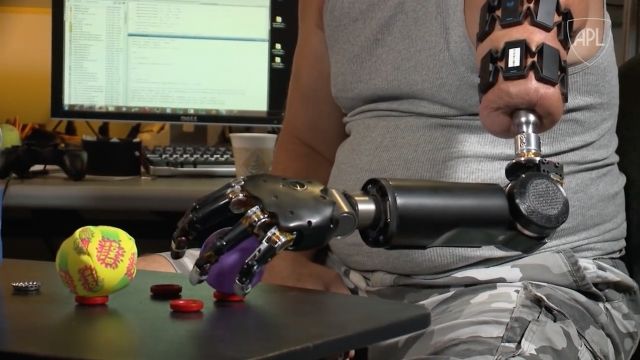 SMS
To Make Prostheses Better, They Have To Talk Back
By Evan Thomas
By Evan Thomas
October 13, 2016
Improving prostheses means granting them their own sense of touch and making them more complex.
SHOW TRANSCRIPT

Today, our most advanced prostheses can do pretty much everything we use our hands or feet for. But to make them as good as or better than a natural limb, they've got to feel natural themselves.

Controlling an artificial arm just by thinking is an important step, and we're getting good at it. But getting feedback from it — feeling where it is and what it's touching — is more difficult.

Researchers are just figuring out how to use brain implants to transmit the sense of touch in paralyzed patients. They found the same tech can give prosthetic limbs their own senses. Their tester reported sensations of warmth and pressure on the prosthetic fingers that felt "natural," even when he was blindfolded.

The other missing piece is fine positioning and motor control. Prostheses on the market right now have more than a dozen grip positions, but they aren't as adjustable or complex as natural limbs yet.

Artificial limbs won't be as responsive as our natural ones until we solve these challenges. Once we do, though, there's nothing stopping them from being stronger and faster than stock.