New Study Says You Should Drop Your Blood Pressure Even More 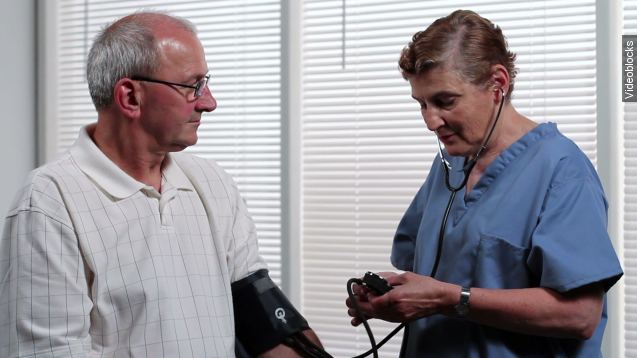 SMS
New Study Says You Should Drop Your Blood Pressure Even More
By Grant Suneson
By Grant Suneson
November 9, 2015
A new study finds that having a systolic blood pressure of under 120 could reduce the risk of death more than 25 percent compared to a reading of 140.
SHOW TRANSCRIPT

For years, the American Heart Association has recommended a blood pressure reading of 140/90 mm Hg or less, but a new study says it needs to be even lower.

That top number measures what’s known as systolic blood pressure, which is the amount of force exerted on blood vessels when the heart contracts. If that force is too great, it’s known as hypertension, which can damage internal organs and lead to stroke or death.

A study, sponsored by the National Heart, Lung, and Blood Institute, says dropping your systolic blood pressure to less than 120 can drastically reduce the risk of heart disease and death.

Researchers gave over 9,000 hypertension patients ages 50 and older an average of one additional medication to drop blood pressure and found the reduction in pressure benefits all races, sexes and ages in the study about the same.

The study should affect at least 17 million Americans with hypertension, and since most blood pressure medications are available as generic prescriptions, the study could save millions of lives for relatively cheap.

In fact, the study was supposed to continue until 2017, but researchers were so excited they ended it early to announce their results. But it’s not without its detractors.

Some doctors are concerned dropping blood pressure too low can cause issues with balance and memory, especially in the elderly. And others aren’t sure getting everyone to drop their blood pressure is even realistic.

The New England Journal of Medicine says, "One-third to one half of people with hypertension in the United States currently have uncontrolled blood pressure, and the figures are much worse in most other countries," so getting down another 20 points could be difficult.

But the study is still a huge step forward in helping treat the No. 1 cause of death in America. The American Heart Association will meet this week to discuss altering its guidelines based on the report.