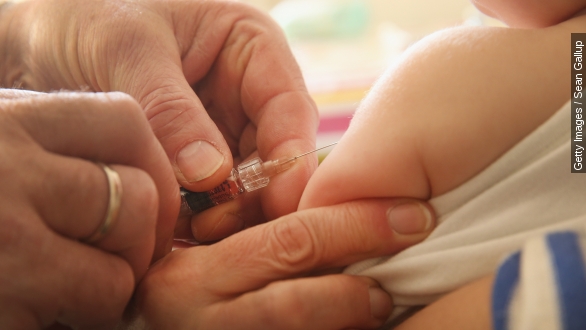 A new study of close to 100,000 children shows no link between the Measles, Mumps & Rubella vaccine and an increased risk of Autism.

Researchers analyzed health insurance claims covering 95,727 children who had received either zero, one of the recommended two doses of MMR vaccine over an 11-year period since 2001.

The study found “no harmful association between the receipt of the MMR vaccine and the development of an autism spectrum disorder.”

“This was true even among those children who were at an increased risk of having autism spectrum disorders by virtue of having an older sibling with ASD,” said Dr. Anjali Jain. (Video via The Journal of the American Medical Association)

The study comes on the heels of an outbreak of Measles, which was traced to Disneyland in December 2014. Health officials documented 131 cases, and determined vaccination status for 81 of those affected. (Video via CBS)

“Of those 80 or so children that they could determine what the status was, they found that 70 percent of those kids had not been vaccinated at all,” said The Wall Street Journal’s Jeanne Whalen.

California health officials declared the outbreak over on April 17, but not before the issue got the attention of President Obama.

“The science is pretty indisputable. We’ve looked at this again and again. There is every reason to get vaccinated. There aren’t reasons to not,” he said in a February NBC interview.

The latest vaccination study is published in the Journal of the American Medical Association.