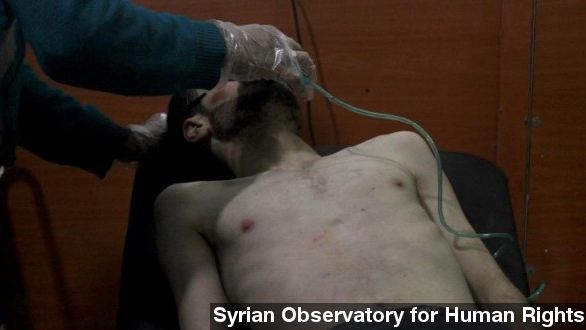 SMS
New Reports Of Chemical Weapons Attack In Syria
By Matt Picht
By Matt Picht
April 13, 2014
Syria's regime and rebel forces are accusing each other of being behind a reported chemical weapons attack.
SHOW TRANSCRIPT

Syria's government is trading accusations with rebel forces over new reports of a gas attack on a village north of Damascus.

This unverified footage purports to show the aftermath of a chlorine gas attack in the town of Kafr Zeita. Opposition groups say six people died in the attack, which coincided with a reported barrel bombing from government helicopters. (Via YouTube / Kafr Zeita)

Syrian state TV paints a very different picture of the attack, which they say killed two people and wounded more than 100. Al Arabiya reports state media blame the attack on the radical al-Nusra Front and accuses the group of plotting two more attacks on civilian targets.

And discovering the truth behind this attack might prove difficult. A former Syrian chemical weapons chief told Al Jazeera chlorine attacks "can't be easily discovered, even if the monitoring regime arrives 48 hours later."

International groups are still working on dismantling the Syrian regime's declared stockpiles of chemical weapons, after a chemical attack in August 2013 prompted the government to turn over its supply. (Via  Euronews)

The New York Times suggests another chemical weapons attack, even after the regime ostensibly surrendered their stockpiles, could have dire implications for the Syrian civil war. "If the government used toxic arms now, that would suggest that it felt it could act with impunity because of international reluctance to punish it militarily."

"We will do everything in our power to establish what has happened, and then consider possible steps. ... We weren't just removing for removing's sake, it was to avoid use. So we will have to look at policy options."