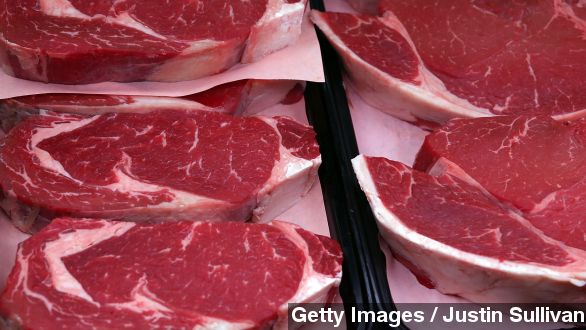 SMS
New Report Could Hit U.S. Meat And Grain Industries Hard
By Jill Ornitz
By Jill Ornitz
February 20, 2015
A new report from nutritional experts says Americans eat too much meat. But there could be big agricultural problems if demand for meat decreases.
SHOW TRANSCRIPT

If Americans want to get healthier and protect the planet simultaneously, they should eat less meat – that's according to a new report from America's top nutritional experts.

The report issued by the Dietary Guidelines Advisory Committee recommends that Americans lower their intake of red and processed meats and up their intake of fruits, veggies and seafood to live a healthier lifestyle. (Video via U.S. Department of Agriculture)

But meat interest groups have been quick to question the accuracy of the report. A spokesperson for the National Pork Producers Council told Politico the report was "off-base," while a dietitian with the National Cattlemen’s Beef Association called it "misleading."

It may not come as a huge surprise that meat producers are unhappy with the report. But the consequences of these recommendations could reach other massive sectors of U.S. agriculture.

Corn is a major source of feed for cattle farmers — it's cheap and it helps cows bulk up quickly for slaughter. (Video via How Farms Work)

So a potential decrease in demand for meat could contribute to a decreased demand for corn. That's bad news for an industry that relies on government subsidies.

But these corn subsidies actually contribute to the poor American diet the new report addressed. According to the USDA, more than 90 percent of domestic high fructose corn syrup deliveries go to the beverage industry.

The panel's report also indicated that cholesterol intake among healthy adults may not increase the risk of heart disease, directly contradicting the findings of the same committee just five years earlier.