New Planets Could Be Lurking Far Beyond Neptune 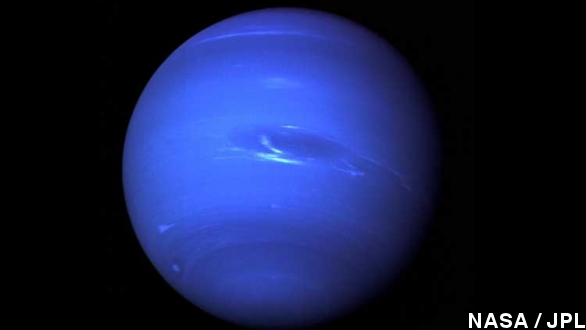 Hearing about the discovery of new planets in nearby solar systems is exciting enough, but a new study claims to have evidence of undiscovered planets even closer to home — right here in our own solar system.

The study deals with a class of objects in the farthest reaches of our solar neighborhood. Objects past Neptune are called trans-Neptunian objects, or TNOs. For example, Pluto is a TNO. (Video via National Geographic)

And things even farther than that are called extreme trans-Neptunian objects, or ETNOs. Many of these distant objects don't move the way they should, and the brightest minds in astronomy have yet to figure out why. (Video via NASA)

One theory is that there are large undiscovered planets whose gravity is affecting the ETNOs' orbits. In the new study, Spanish scientists say their calculations show exactly that.

One co-author explains, "The most probable explanation is that other unknown planets exist beyond Neptune and Pluto."

Sounds a lot like we're finding out two new families are living in our astro-community. But so far these mysterious planets haven't been observed, and Phil Plait, Slate's resident astronomer, says there are other possibilities.

"The evidence they present is interesting, maybe even compelling, but it by no means is proof. ... It seems clear something odd is going on, but the mechanism behind it isn't clear. Planets? Maybe. But it could be something else," he said.

While we can't be sure what's well beyond Neptune, we'll soon get a closer look at a more familiar TNO: the former full-fledged planet, Pluto. NASA's New Horizons spacecraft is expected to make its closest approach to the dwarf planet July 14.