New Painkiller Designed To Discourage Abuse: Will It Work? 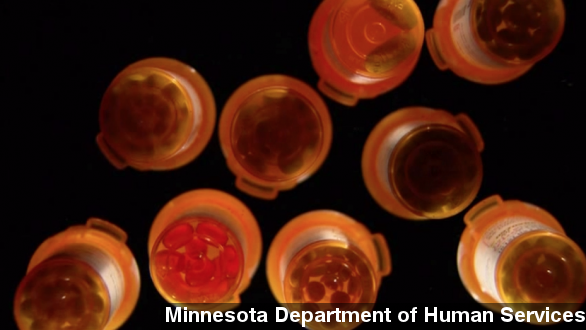 SMS
New Painkiller Designed To Discourage Abuse: Will It Work?
By Cliff Judy
By Cliff Judy
July 24, 2014
The FDA approved Targiniq ER on Wednesday, a painkiller designed to keep users from abusing it. Like any new medication, however, it has doubters.
SHOW TRANSCRIPT

A painkiller combined with a drug that stops the painkilling. In a what-will-they-come-up-with-next industry like "Big Pharma," skepticism was sure to follow the Food and Drug Administration's approval of a new pill.

On Wednesday, the FDA approved Targiniq ER, a combination of the painkiller oxycodone and naloxone. (Via Minnesota Department of Human Services)

Naloxone blocks the euphoric effects of painkillers. It gained significant publicity earlier this year when the NYPD announced officers would carry it in case they encountered someone overdosing on heroin. (Via Getty Images)

So what's the point of the oxycodone/naloxone combo? In Targiniq ER, the naloxone only activates if someone crushes the pill.

The FDA hopes that discourages addicts who crush, then snort or inject the drug to get high. Targiniq's makers, Purdue Pharma, did something similar with OxyContin when it changed that pill's formula to a difficult-to-crush version in 2010. (Via Current TV / "Hillbilly Heroin")

In just two years, the number of people with opioid dependence who used OxyContin as their primary drug dropped from 36 percent to 13. But The New England Journal of Medicine noted many of those users switched to combinations of other drugs, including heroin.

"Thus, abuse-deterrent formulations may not be the 'magic bullets' that many hoped they would be in solving the growing problem of opioid abuse." (Via The New England Journal of Medicine)

The FDA specifically noted Targiniq should only be prescribed for people with chronic pain where other treatments were ineffective and "should not be used, for as-needed pain relief."

But the chief medical officer for a network of addiction treatment centers based in Phoenix told the Los Angeles Times if doctors think Targiniq is safe, they may prescribe it by default instead of seeking alternatives.

DR. ANDREW KOLODNY: “If we really want to turn this epidemic around, the most important thing is to stop creating new cases of addiction. Coming up with new gimmicks isn’t going to help.”

Just this month, the Centers for Disease Control and Prevention said 46 people die each day in the U.S. from painkiller overdoses.

The FDA noted Targiniq taken orally when the naloxone isn't activated is just as addictive a painkiller as regular oxycodone and can cause overdoses. The administration is requiring follow-up studies to monitor risks of using the drug.