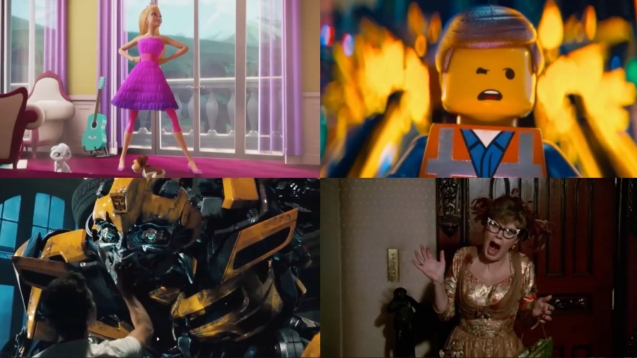 SMS
New Movie Inspiration Seems Firmly Planted In The Toy Box
By Katherine Biek
By Katherine Biek
May 29, 2015
Despite years of making movies based around childhood toys, Hollywood is still finding more to produce movies around.
SHOW TRANSCRIPT

More and more, it seems like Hollywood is turning to the toy box for inspiration.

"It's Barbie like you've never seen her before," said a character in a Barbie film.

"Whoa, that was close!" replied another character.

Case in point: 20th Century Fox and Hasbro have teamed up to create a live-action movie about Play-Doh. Yep — those little colored blobs of clay that you may or may not have tried to eat as a child.

OK, does this sound ridiculous to anyone else? Not the eating part. The movie part.

Bizarre — yes. But Hasbro has a great track record of creating films around its various lines of toys. Like all four of its "Transformers" movies.

And despite terrible reviews, both "G.I. Joe: The Rise of Cobra" and "G.I. Joe: Retaliation" had people flocking to the box office.

Let's be honest, when Channing Tatum and Bruce Willis and The Rock are in a movie together, the people will come. That's action-movie gold right there.

So we’re going to be positive. Maybe the Play-Doh flick will turn out like “The LEGO Movie.”

Despite plenty of skepticism, it scored a 96 on Rotten Tomatoes, with critics raving about "beautiful animation, a charming voice cast, laugh-a-minute gags and a surprisingly thoughtful story."

"The prophecy states that you're the most important person in the universe. That's you, right?"

It was even nominated for an Oscar. Its original song "Everything Is Awesome" lost out to one from the movie "Selma," but it's the nomination that counts, right?

OK, we get that “Toy Story” wasn’t based on a specific toy brand, but we had to throw it in here anyway. We get nostalgic just thinking about it.

And throughout the years, Hollywood has also used board games as the basis for many films, including “Clue,” “Battleship,” “Ouija” and “Dungeons & Dragons.” Forgot about that last one, didn’t you?

And if the Play-Doh movie ends up being a dud, it’s OK. ‘Cause movies based on Monopoly and Hungry Hungry Hippos …

... as well as a live-action Barbie movie, are all in the works too.

We can’t wait to learn who’s gonna play Uncle Pennybags in that Monopoly flick. Our vote is for Michael Caine. If anyone could make a film about Monopoly worth watching, it’d be him.