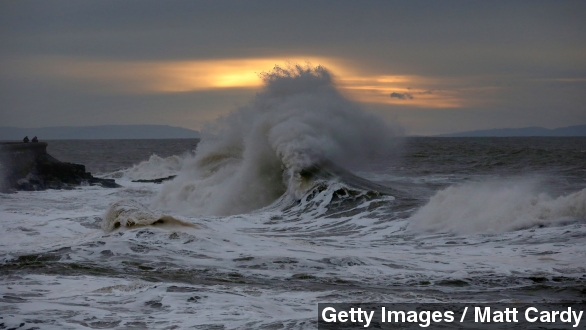 A matter of inches could completely change the way scientists think about rising sea levels. (Video via National Oceanic and Atmospheric Administration)

A group of researchers from Harvard and Rutgers University found the yearly rate of increase from 1900 to 1990 was likely off by a fraction of a millimeter and was actually 1.2 millimeters per year, instead of 1.6 to 1.9 millimeters.

What that means is that instead of an estimated 6.7-inch increase in sea levels over those 90 years, the world actually saw a 4.2-inch increase, a difference of 2.5 inches.

As The New York Times notes, that might not seem like much, but a difference of even one inch "turns out to be an immense amount of water: on the order of two quadrillion gallons."

That's a one-inch difference, so to put a difference of more than two inches in perspective, the whole of Lake Superior — the greatest of the Great Lakes — holds some 3 quadrillion gallons, so the measurements could've been off by more than a Lake Superior. (Video via Google and YouTube / AgateBayConsulting)

Modern tide gauges are one tool scientists use to measure sea level increase, but for that 90-year period, the gauges weren't as sophisticated, and their data was limited. (Video via KQED)

Scientists came up with a model that took that into account, and their estimates for sea level increase match up with ice melt, and other contributors much better. But they also highlight a growing problem.

We already knew the rate of sea level rise had been accelerating, but the new estimates show sea levels have been rising even faster than previously thought. (Video via YouTube / Annie M)

In fact, the average sea level rose at a rate of 3.2 millimeters a year between 1993 and 2009, more than double the rate during most of the 20th century.

The new information does mean scientists can have a better picture of how much sea levels will rise in the coming years, which will be a major concern for island nations, coastal communities and many others. (Video via Greenpeace)

This video includes an image from PublicDomainPictures.