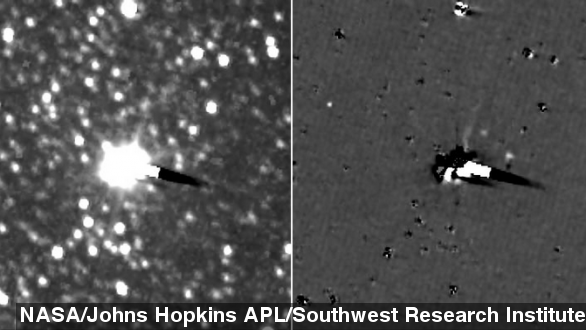 NASA launched the New Horizon spacecraft in 2006 to learn more about the icy dwarf planet Pluto. Here are some of the first photos from that mission, taken from between 125 million and 115 million miles away.

The two objects in orange and yellow diamonds are Nix and Hydra, respectively. They're two moons of Pluto, which is there in the center, and this is the first time we've gotten an extended look at both of them.

NASA released the long-exposure images on Feb. 18, exactly 85 years since Pluto was first discovered by Clyde Tombaugh in Flagstaff, Arizona.

Both Nix and Hydra were first discovered in 2005 using the Hubble Space Telescope — one year before Pluto was ultimately downgraded from a full planet to only a dwarf planet.

These won't be the only images we pick up from New Horizons, either. After waking from its hibernation period in December last year, the spacecraft began its primary mission to collect data as it slowly approaches Pluto.

As it gets closer, New Horizons will be able to provide more detailed photos of both Nix and Hydra. It'll also catch a glimpse of Pluto's even smaller moons Styx and Kerberos. (Video via NASA)

New Horizons is set to reach Pluto's system this summer on July 14.

This video includes images from NASA and music by Skill_Borrower / CC by NC Sampling Plus 1.0.