New Horizons Gives Us A Close-Up Of Pluto 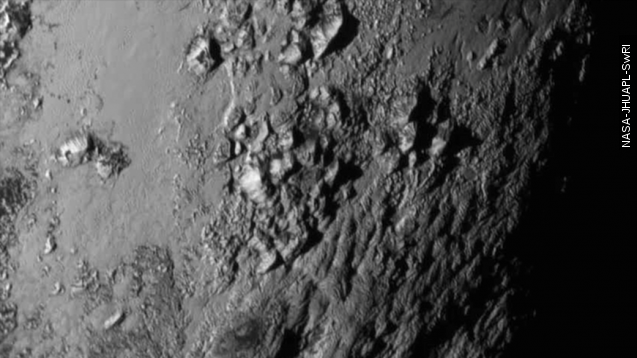 SMS
New Horizons Gives Us A Close-Up Of Pluto
By Ben Lawson
By Ben Lawson
July 15, 2015
NASA has unveiled the first photos from the New Horizons flyby of Pluto and revealed some new facts about the dwarf planet and one of its moons.
SHOW TRANSCRIPT

After completing the first ever flyby of Pluto, the New Horizons spacecraft has sent back images containing the best look at the dwarf planet yet.

Probably the most interesting was a close-up of Pluto's surface. It revealed mountain ranges that were as high as 11,000 feet and, scientists believe, only around 100 million years old — which is pretty young compared to our 4.5 billion year-old solar system.

We also learned a lot more about Pluto's biggest moon, Charon. An image revealed a huge stretch of cliffs and troughs that extends for about 600 miles. Scientists also believe Charon to be relatively young due to the lack of craters.

And thats only a tiny fraction of the information New Horizons gathered, but it's expected to take 16 months to send it all back to Earth.

"We have a healthy spacecraft, we have recorded data on the Pluto system and we are outbound for Pluto."

It was a nine-year, 3 billion-mile journey to Pluto, so there was quiet a bit of excitement when team members at the Johns Hopkins Applied Physics Laboratory finally got that "mission accomplished" message.

Though it cost $700 million and weighs 1,000 pounds, New Horizons is only the size of a baby grand piano. It came within 7,800 miles of Pluto's surface flying at 8.5 miles per second.

NASA scientists say a successful mission to Pluto means that NASA has completed its initial exploration of our solar system.

But there is still more to do. After Pluto, New Horizons is headed to the Kuiper belt, a region beyond Neptune which could contain as many as 100,000 comets and asteroids.