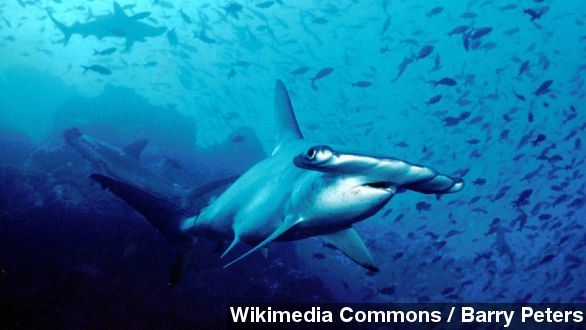 A new type of hammerhead shark has been discovered off the coast of South Carolina. Up until now, it's remained well-disguised.

"Researchers say the new shark looks almost identical to the more common scalloped hammerhead. ... Researchers aren't sure how big it gets because they've never found an adult of the species." (Via WWAY)

But we do know the new species has 10 fewer vertebrae than a scalloped hammerhead, making it morphologically different. It's now being dubbed the Carolina Hammerhead. (Via WTIC)

That's all according to researchers at the University of South Carolina. According to the team's leader, they found the new species near the mouth of the state's river system, which is no surprise given South Carolina is a well-known pupping ground for several different types of sharks. (Via YouTube / Gray Cassell)

What's interesting though, is how rare it is to identify a cryptic species, meaning one that's nearly indistinguishable from the more common species.

The lead researcher said: "Outside of South Carolina, we've only seen five tissue samples of the cryptic species. And that's out of three or four hundred specimens."

However, sharks are on the decline, especially the scalloped shark population, which has plummeted by up to 90 percent in the past few decades. And there have been other species of shark identified recently.

Another type of "walking" shark was discovered in a reef off a remote Indonesian island in August. This shark tends to appear to touch the sea floor as they swim, hence its name. (Via Conservation International / MV Erdmann)