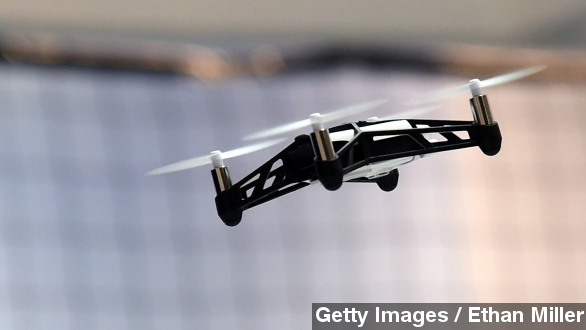 The skies could soon open up to more unmanned commercial aircraft after the Federal Aviation Administration proposed new rules Sunday for drone use.

The FAA’s landmark policies, which would apply to "small unmanned aircraft systems" including drones, would allow more commercial applications, such as filming, mapping and agriculture.

Commercial operations would be limited to an altitude of 500 feet, with a 100 mph speed limit. Flights would have to take place during daylight hours.

The FAA says operators would be required to maintain line of sight. And no, those onboard cameras wouldn't count. (Video via BBC)

A leaked version of the proposal, which several media outlets first reported Saturday, explains "There is no acceptable technological substitute for direct human vision in small UAS operations at this time."

Operators would have to be at least 17 years old, pass a basic aeronautics test and hold an FAA license for operating a drone. The certification would be renewed every two years.

The FAA is not including any maintenance or federal inspection requirements. Operators would be responsible for their own preflight safety checks.

The earlier leaked version of Sunday's notice does not legalize or apply to drones carrying cargo, which suggests the future of systems, like those Google and Amazon are testing, are still — for lack of a better term — up in the air.

But the strict line of sight requirement would effectively prevent drone delivery under these rules, unless you happen to live really close to an Amazon fulfillment center.

According to the FAA, the proposal "also includes extensive discussion of the possibility of an additional, more flexible framework for 'micro' UAS under 4.4 pounds."

The FAA is accepting 60 days of public comment before moving forward. In the meantime, the agency will enforce existing rules on unmanned aircraft operation.

This video includes images from Getty Images and Christopher Michel / CC BY 2.0.