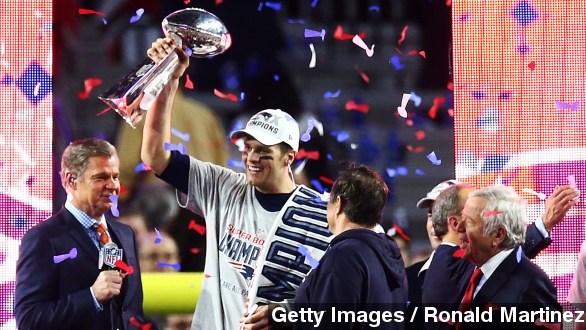 Tom Brady's still got it — it being a flair for the dramatic. Brady was clutch again, leading New England in a late fourth quarter, game-winning drive to beat the Seattle Seahawks 28-24 in Super Bowl XLIX.

It came down to the wire. After Brady's drive, the Seahawks fought back. Russell Wilson connected with Jermaine Kearse, and the Seahawks were eventually within a yard of New England's goal line. But the comeback would stop there. Patriots cornerback Malcolm Butler picked off Seahawks quarterback Russell Wilson across the middle and New England held on to win.

It's New England's first Super Bowl win since 2004, and Tom Brady's fourth victory at the big game in his sixth appearance as a starter — tying him with Terry Bradshaw and Joe Montana with the most wins all time.

It was Brady's late fourth quarter drive that helped the Patriots overcome a ten point deficit. The Patriots went 64 yards in ten plays, finishing it off with a three yard touchdown pass from Brady to Julian Edelman. The 37-year-old completed all eight of his throws that drive.

This video includes images from the Getty Images