What We Know So Far About Earth's New Twin 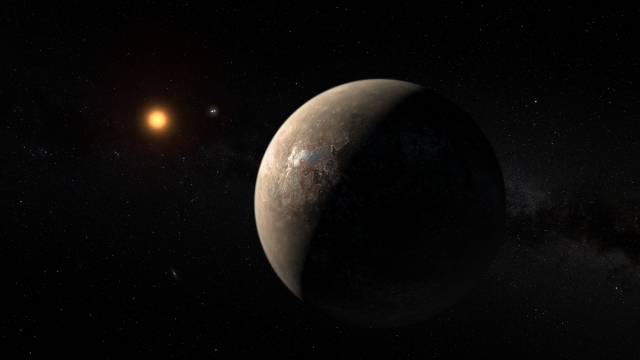 A new planet has been discovered that may be Earth-like, and it's really, really close. If we're ever going to look for life outside our solar system, this is probably where we'll start. Here's what scientists say about it.

The planet might have liquid water, which is crucial to life as we know it. It's in the habitable zone, that sweet spot where it's not too hot nor too cold to have water on its surface.

The planet orbits the closest-known star to ours, Proxima Centauri, which is about 4.25 light years away. It's in the southern sky, but it's too dim to see with the naked eye.

Four light years is nothing in space terms, but it's still too far to travel to any time soon. Our most pie-in-the-sky technology would still take decades to carry a probe there.

If we do ever travel there, it should feel somewhat familiar. The planet is about the same size as Earth, meaning gravity would be close to what we're used to. But its days and nights would be strange. It circles its sun every 11 days.

It's tempting to get excited about an Earth-like planet that couldn't be any closer, but there are some big unknowns. It's not clear yet whether the planet has an atmosphere or a magnetic field. Without those, the odds of finding life are pretty much zero.

Luckily, we don't have to wait too long to learn more. NASA's James Webb Space Telescope is set to launch in 2018, and it will be able to look for an atmosphere. And Stephen Hawking is supporting a plan to send a probe to nearby Alpha Centauri.