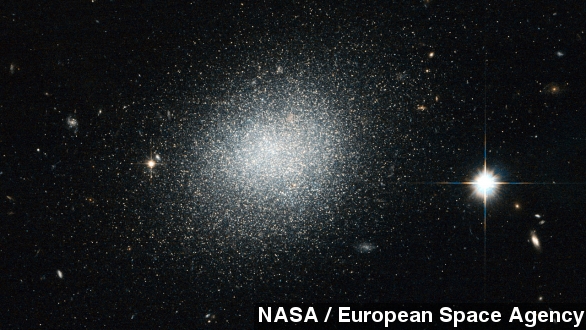 Our galaxy has a lot of neighbors. Two teams working independently have identified eight to nine objects that appear to be dwarf galaxies orbiting the Milky Way. (Video via NASA)

The discoveries come from a new in-depth survey of the southern sky that will allow astronomers to find the faint signatures of stars that are nearby but outside our galaxy.

If confirmed, the new objects would join around two dozen other dwarf galaxies known to follow the Milky Way around.

The teams used data from The Dark Energy Survey, a collaboration that uses the world's most powerful digital camera to photograph the sky in unprecedented detail. Its goal is to help scientists understand dark matter and dark energy.

One of the top candidates for dark matter are theoretical particles physicists have dubbed "WIMPs." They don't interact with light, but may emit gamma rays. (Video via NASA)

NASA has a telescope named Fermi that can search for those rays in dwarf galaxies.

"These faint, tiny galaxies possess impressive amounts of dark matter, but they contain no gamma ray-emitting objects and little gas or star formation."

And finding more dwarf galaxies, like these new ones close to home, gives telescopes like Fermi new targets to study. It's thought The Dark Energy Survey may find dozens more nearby galaxies before its mission ends.

This video includes images from Fermilab.