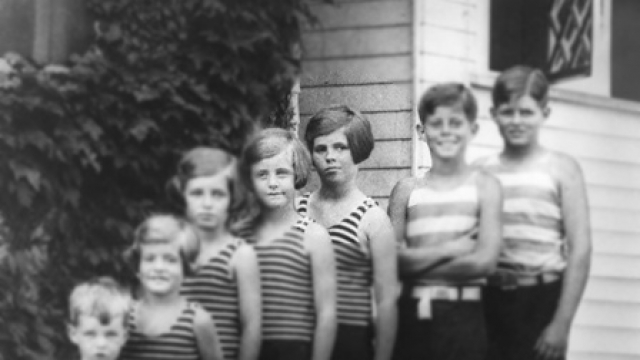 Several books have been devoted to the tragic life of Rosemary Kennedy, the oldest Kennedy daughter who was permanently incapacitated at 23 after undergoing a lobotomy.

But it's a new book about her sister Kathleen that reveals Rosemary's connection to the actress who supposedly had an affair with Rosemary's father.

Maria Riva, daughter of movie star Marlene Dietrich, first met Rosemary Kennedy in 1938 when the family was vacationing in France. She says she grew close to the Kennedys because of her mother's affair with Joe Kennedy Sr.

Riva, who's previously said she felt "gawky" around the athletic Kennedy children, says she might have latched on to Rosemary's different behavior. "Perhaps being two misfits, we felt comfortable in each other's company," Riva writes.

Riva says she quickly bonded with Rosemary, who she describes as "the damaged child amidst these effervescent and quick-witted children." But Riva adds she grew distant from Rosemary after finding out about the relationship between their parents.

Rosemary's lobotomy wouldn't happen until years later, when her father decided the procedure could cure her behavioral problems. The operation would leave her institutionalized for the rest of her life.

Rosemary was one of the earliest lobotomy patients; the procedure was eventually performed 50,000 times in the U.S. The surgical procedure's poor success rate and devastating side effects led to it being scrapped in the 1950s.

The Kennedy family kept Rosemary shielded from public scrutiny after the procedure, but her experience inspired some members of the family to campaign for better treatment for the mentally disabled.

Rosemary's condition has been cited as part of the reason Eunice Kennedy Shriver founded the Special Olympics in 1968.

This video includes images from the John F. Kennedy Library Foundation and The Saturday Evening Post.