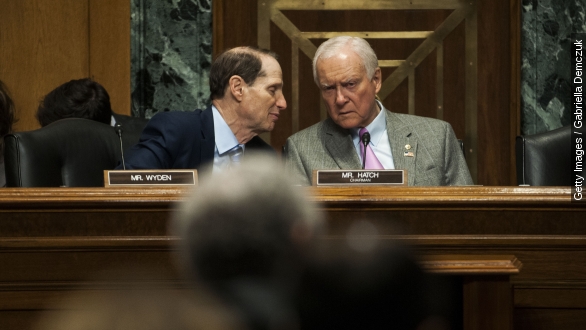 SMS
New Bipartisan Push Could Give Obama More Trade Powers
By Matt Picht
By Matt Picht
April 16, 2015
A Congressional agreement could give Obama the power to fast track trade deals — a crucial step towards signing free trade deals with other nations.
SHOW TRANSCRIPT

A new bipartisan bill introduced in the Senate Thursday has kicked off what could be the biggest legislative fight of President Obama's last years in office.

Republican Sen. Orrin Hatch, who chairs the Senate Finance Committee, has unveiled an agreement with ranking Democrat Ron Wyden over a bill to give the president an executive power known as "trade promotion authority." Paul Ryan, the chairman of the Ways and Means Committee in the House, is expected to support a similar measure.

The provision basically allows the White House to fast-track international trade deals through Congress. Legislators would get a basic yes-or-no vote on those agreements, but they won't be able to add amendments or tie them up in procedures.

Trade promotion authority has been around in some form or another since the 1970s, and it's been instrumental in passing other big trade deals like the North American Free Trade Agreement.

But it requires Congress to pass a law ceding that power to the president. The last such law expired in 2012, and the White House has been pushing for a renewal.

Oddly enough, the Obama administration's main supporters in Congress are pro-business Republicans, who argue the measure is crucial to securing free-trade agreements and strengthening the U.S.'s economic hand around the world.

House Ways and Means Committee Chair Paul Ryan told CNBC, "Our trade partners won't give us their best offer if they think that when we bring it to Congress, they'll just rewrite it."

But top Democrats and labor groups don't want Congress to lose oversight of deals that could potentially cost U.S. workers their jobs.

AFL-CIO President Richard Trumka said in a statement, "Trade deals have wide-ranging impacts and shouldn’t be negotiated behind closed doors and then rubber-stamped."

Complicating matters further, the first deal that's expected to get the "trade promotion authority" treatment will be the Trans-Pacific Partnership, a massive free-trade agreement between the U.S. and 11 Asian countries. The deal has been in the works for years and has attracted criticism over the secrecy of negotiations.