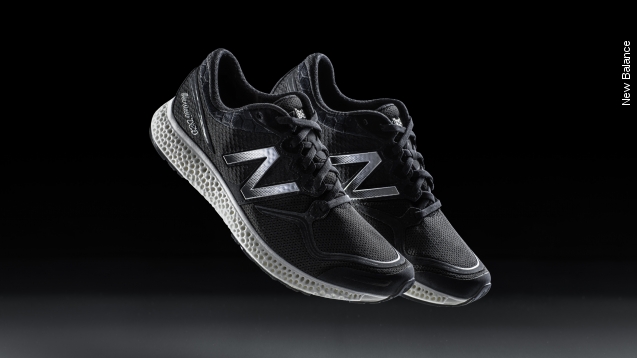 Running shoe manufacturer New Balance is set to be the first to cross the finish line with 3-D printed shoes designed for mass production.

New Balance revealed it uses lasers to convert elastomeric powder into the first ever 3-D printed midsole in a running shoe.

New Balance says it hopes to offer customizable 3-D printed shoes at select locations by 2017. CEO Robert DeMartini said in a press release, "With 3D printing we are able to pursue performance customization at a whole new level."

New Balance has already tested out its 3-D printing technology in some of the biggest competitions in the world. Kim Conley won the USA Track & Field women's 10,000 meter championship in 2014 while wearing the company's 3-D printed spikes, and Arsenal midfielder Aaron Ramsey won the FA cup in May with printed plates on his boots.

Being first to market with this technology is a big win for New Balance. Competitors Nike and Adidas have also been working on their own versions of 3-D printed shoes.

But the design isn't quite perfect yet. The printed midsole is more than an ounce heavier than the midsole in New Balance's Fresh Foam Zante model, which is what the printed shoe is based on. But the company says it'll continue tweaking the design before the shoe is officially unveiled. (Video via New Balance)

New Balance's press release says it'll debut a prototype of the running shoe at the Consumer Electronics Show in January 2016, followed by a limited release in New Balance's hometown of Boston in April.