New Arthropod Fossil Might Be Relative Of Spiders, Scorpions 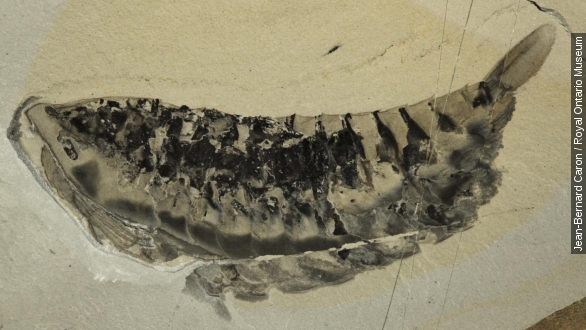 SMS
New Arthropod Fossil Might Be Relative Of Spiders, Scorpions
By Evan Thomas
By Evan Thomas
March 29, 2015
A 508-million-year-old arthropod that swam in the Cambrian seas is thought to share a common ancestor with spiders and scorpions.
SHOW TRANSCRIPT

Paleontologists have discovered the fossilized remains of a new arthropod.

Yawunik kootenayi was swimming around oceans in Canada in the Cambrian period, 508 million years ago. It's thought to share a common ancestor with today's spiders and scorpions. (Video via the University of Toronto)

The arthropod had four eyes and arms lined with both tiny claws to help it feed and long antennae to sense its surroundings. (Video via the Royal Ontario Museum)

The study's lead author says species today don't have limbs that function like that:

"This dual function is very, very special, because it does not appear in modern forms. If you take insects as an example, they have a very constrained body plan. But the constraints were not the same in Yawunik."

Researchers at the Royal Ontario Museum found the arthropod in the Marble Canyon fossil beds in Canada. Since they discovered the site in 2012, it's produced some of the best-preserved fossils we know of.

"There's reports of perhaps the liver and heart and some of the gut content of some of these creatures has been fossilized, which is very unusual. It's usually just the hard parts: shells, bones," said Stuart Sutherland, a paleontology professor at the University of British Columbia. (Video via CBC)

Researchers have published their findings about this latest discovery in the journal Palaeontology.