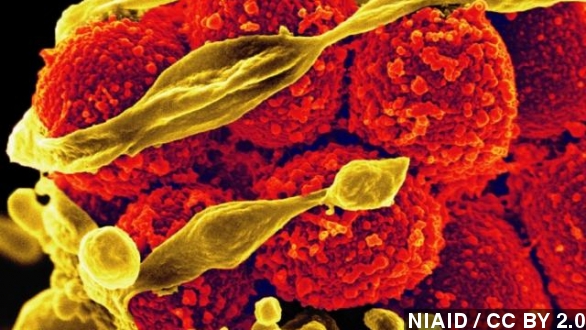 By Cliff Judy
January 8, 2015
Researchers published findings on teixobactin on Wednesday. The compound might hail a new line of antibiotics to which bacteria have trouble adapting
SHOW TRANSCRIPT

Researchers believe they may have found an antibiotic that kills off even the toughest strains of bacteria without allowing that bacteria to build up a resistance.

In a study published online Wednesday in the journal Nature, researchers introduced teixobactin.

Drug-resistant tuberculosis and even MRSA you see here died off at a rate so effective researchers figured the new compound was toxic and wouldn't make for a useful drug when they tested it on mice. One even said he figured this was just another boring molecule.

Intriguing indeed. Since Alexander Fleming discovered penicillin, most antibiotic research has been done on the one percent of microbes that can be tested easily in a petri dish in a lab. (Video via CBS)

But researchers grew this new compound by tricking soil microbes into developing while they were still in the ground. It turns out our next great drug may have just grown in a grassy field in Maine.

"Antibiotic resistance is one of the most serious health threats we face today," CDC director Dr. Tom Frieden said.

The CDC believes antibiotic-resistant bacteria infect more than 2 million people and kill more than 23,000 people a year. (Video via CDC)

Most antibiotics attack a particular part of the bacteria's cell structure like the DNA in proteins or its cell wall, but the bacteria eventually adapt to the attacks and continue their spread stronger than before. (Video via Cubist Pharmaceuticals)

This compound attacks two molecules crucial for the bacteria's cell wall meaning even if a resistance built up for one molecule, teixobactin would still kill the bacteria by attacking the other. Researchers pointed out it took 30 years for bacteria to develop resistance to another drug discovered in the 1950s that uses similar tactics.

But before we declare this a super drug, experts who weren't part of the study have already cautioned bacteria developing a resistance is likely just a matter of time.

One NYU professor told The Washington Post, "The danger in a drug like this is that the minute it gets released, everyone and their cousin will want to use it, and that would be a catastrophe. If I made the rules, I'd rule that it not get used outside the hospital, and not without supervision."

Researchers believe they're still two years away from a clinical trial on humans and at least five years from a new drug on the market. It should also be noted several researchers have a financial stake in the company that owns the patent for this new compound.

This video includes images from Getty Images and the National Institute of Allergy and Infectious Diseases.