New Air Force One Fleet Is On The Way 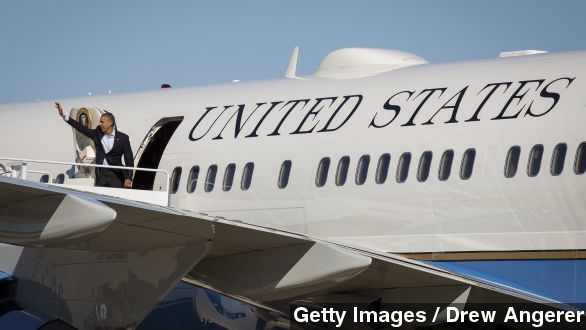 SMS
New Air Force One Fleet Is On The Way
By Jamal Andress
By Jamal Andress
January 29, 2015
The next plane set to carry a U.S. president will be a Boeing 747-8, a four-engine, wide-body aircraft built in Washington state.
SHOW TRANSCRIPT

After carrying Bill Clinton, George W. Bush and Barack Obama, it seems both presidential planes used as Air Force One will soon be replaced.

The two 25-year-old planes that carry the President now are Boeing 747-200 aircraft and have a 30-year shelf life to serve their civic duty. (Video via CNN)

The next plane set to carry a U.S. president will be a Boeing 747-8, a four-engine, wide-body aircraft built in Washington state.

Air Force Secretary Deborah Lee James said in a statement while announcing plans for the new plane, "Parts obsolescence, diminishing manufacturing sources and increased down times for maintenance are existing challenges that will increase until a new aircraft is fielded."

The Air Force chose the Boeing aircraft to be the sole contractor for the new Air Force One fleet, and, according to the White House, U.S. presidents have been flying with Boeing since 1962.

President Kennedy became the first commander in chief to fly in a jet specifically built for the president. (Video via C-SPAN)

According to Bloomberg, the Air Force has set aside $1.6 Billion for its "aircraft replacement program" and will begin testing a new Air Force One in 2018. Then the new fleet will undergo at least five years of testing before the president gets on board.

And while five years may seem like a long time, Air Force One does have plenty of moving parts. It can refuel mid-air, serve as a mobile command center if necessary, and, of course, is great for mid-air, near-death fight scenes.

“Get off my plane” Harrison Ford said in "Air Force One."

The Air Force estimates the new fleet will be in the air and officially on duty sometime in 2023. So, to whoever wins in 2016, you’re going to have to get re-elected to fly in the new version.