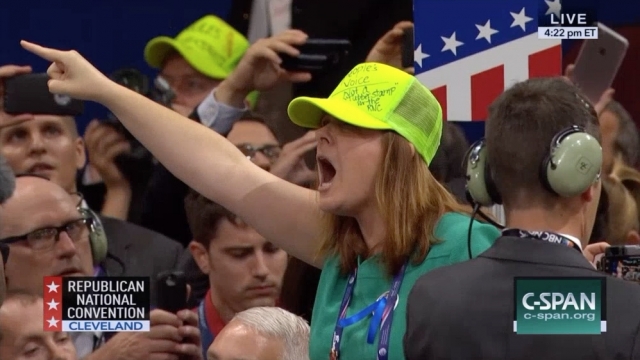 "The question is on adoption of the resolution. All those in favor say 'aye.' All those opposed, 'no.' In the opinion of the chair the ayes have it and the resolution is agreed to," Rep. Steve Womack declared.

It didn't take long for the floor of the Republican National Convention to become unruly.

"A majority of the delegates from 11 states have submitted written petitions asking for a roll call vote on the rules," Utah delegate Sen. Mike Lee said.

Those rules are the convention rules. Among them a requirement binding all delegates to their state's primary or caucus winner.

"The chair now recognizes the delegate from the state of West Virginia," a speaker on stage said.

"Never Trump" delegates hoped the rules wouldn't be approved during a roll call vote, potentially allowing them to unbind their votes.

"Did they just railroad us?" a nearby woman asked.

During the chaos, delegates from Colorado and Iowa walked off the floor, and the convention stage was left empty.

"As a lifelong Republican, I've never seen anything like this," Utah delegate Sen. Mike Lee said.

When party officials resumed convention activities, they said they received petitions from only nine states and three retracted their petitions — declaring there wasn't enough support to force a roll call vote.

Ultimately, the uprising failed and the rules were adopted. The delegates will vote on their nominee Tuesday.