Networks Back Away From Bill Cosby After Assault Claims 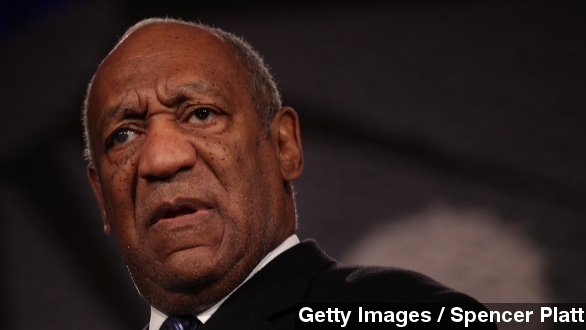 SMS
Networks Back Away From Bill Cosby After Assault Claims
By Jamal Andress
By Jamal Andress
November 19, 2014
With several women now claiming to have been drugged and assaulted by Cosby, NBC, Netflix and TV Land are all distancing themselves from the comedian.
SHOW TRANSCRIPT

Known by many as America's Dad and the classiest of comedians, Bill Cosby and his wholesome image are taking a serious beating.

JANICE DICKINSON VIA ENTERTAINMENT TONIGHT: "I remember before I passed out that I had been sexually assaulted by this man."

DON LEMON VIA CNN: "Rape allegations taking a toll on Bill Cosby and his career. ... "

BARBARA BOWMAN VIA THE WASHINGTON POST: "My screaming and yelling and wrestling away from him became too great."

Since 2005, Cosby has been accused of sexual assault by at least six different women who all claim they were drugged beforehand. The most famous victim is supermodel Janice Dickinson, who gave her story to Entertainment Tonight on Tuesday.

The allegations have gotten some press over the years, but got a wider audience due to a viral video of comedian Hannibal Buress calling Cosby a rapist. Ever since, old accusations have made new headlines — and they're starting to affect the 77-year-old comedian's career. (Video via NBC)

Tuesday night, Netflix announced it was postponing its original stand-up comedy special "Bill Cosby 77," and the very next day NBC followed suit, announcing it was pulling the plug on a new sitcom starring Bill Cosby that was "in the early development stages."

And according to the Hollywood Reporter, Bill Cosby's claim to fame — The Cosby Show — has also been cut from the TVLand lineup.

And while Cosby has never faced trial for any of these allegations, public opinion seems to have turned on him, with no one attempting to defend Cliff Huxtable.

As The Atlantic points out, the nature of the allegations against Cosby make it hard to speak up on his behalf. "A defense of Cosby requires that one believe that several women have decided to publicly accuse one of the most powerful men in recent Hollywood history of a crime they have no hope of seeing prosecuted, and for which they are seeking no damages."

Also at play is Cosby's silence. Aside from a statement released by Cosby's lawyer, the iconic comedian hasn't spoken publicly about the allegations even when given the chance.

"Do you have any response to those charges? Shaking your head 'no.' There are people who love you who might like to hear from you about this. I want to give you the chance. All right."

A writer for MSNBC calls ignoring the allegations "absurd and pompous" and adds, "It trivializes what may have occurred. Cosby may not want to address the op-eds and online chatter, but their substance is too important to ignore."

A former prosecutor who investigated Cosby over the allegations a decade ago told CNN he would have pursued charges at the time, but Cosby's accuser waited a year to come forward, making it impossible to gather much evidence.