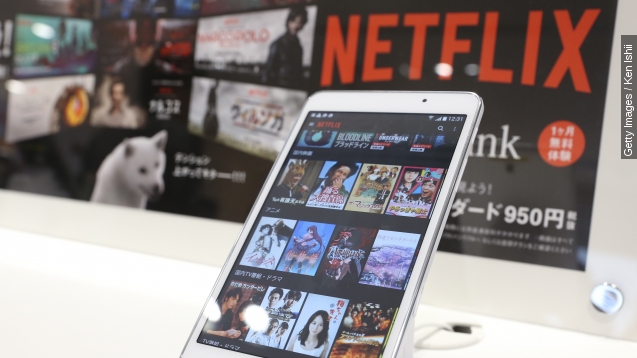 SMS
Netflix Thinks It Can Make High-Quality Video Less Of A Bandwidth Hog
By Evan Thomas
By Evan Thomas
December 15, 2015
Netflix says it will eventually adjust its video algorithms for each scene of a show or movie so it can squeeze more quality into less bandwidth.
SHOW TRANSCRIPT

Streaming Netflix is about to get easier.

Variety reports Netflix is working on variable encoding to save customers as much as 20 percent of the data they're using now.

That's a lot of bandwidth: According to analytics from Sandvine, Netflix gobbles almost 37 percent of all prime-time Internet traffic in North America.

Until now, Netflix assigned preset encoding rates to your content based on how fast your Internet connection was. Soon, it will start using different encoding rules based on the graphical detail of the content you're watching. (Video via Netflix)

Netflix engineers explain it like this: The less movement and detail there is on screen, the less encoding — and the less bandwidth — it needs. Animated shows or slow documentaries are typically easier to encode than explosive action movies. (Video via Netflix, Walt Disney Studios)

You can drill all the way down to the pixels to see it in action: The less the scene changes, the less frequently each pixel has to update. A smart algorithm can send pixels new data only when they need it.

Netflix intends to get specific: It will apply these new settings on a per-stream basis and is looking into doing the same on even a per-scene basis.

Everybody wins: You burn through less data, and Netflix frees up more resources to tackle projects like 4K footage or higher framerates, which you can bet will require more bandwidth. (Video via Netflix)

This video includes images from Getty Images and To Uyen / CC BY 3.0.