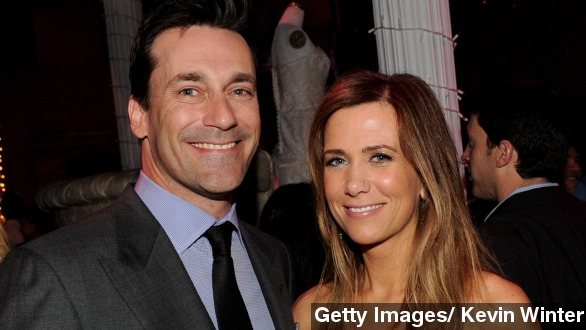 You might remember this line from the film: "Your campers are stuck in the ropes course. I meant to tell you about that yesterday. Could you get to it now?" (Video via USA Films)

The four will join much of the original cast from the 2001 movie. Amy Poehler, Bradley Cooper, Paul Rudd, Elizabeth Banks and more are returning.

Snagging the old cast members maybe wasn't as much of a surprise. When Netflix revived "Arrested Development," the original cast also returned. Getting actors back on board for projects they loved is doable.

But to grab new talent as big as Kristen Wigg and Jon Hamm? It speaks to the power of Netflix right now.

"We also want to say a massive thank you to Netflix, Lionsgate, our family there," said Uzo Aduba as she accepted the award on behalf of the cast of "Orange is the New Black," an original series on Netflix.

"Netflix, not for a second, in both that first two episodes and in every episode since, has ever come to us with a concern," said Kevin Spacey when he accepted an award for his role in the Netflix original series, "House of Cards."

Netflix is riding an awards-season high. It just snagged Golden Globes and SAG Awards for "House of Cards" and "Orange is the New Black." The wins could definitely have been a boost in signing on big talent for "Wet Hot American Summer."

This week Netlfix released a teaser for the eight-episode miniseries "Wet Hot American Summer: First Day of Camp," and it's all about confirming some of those big names. Literally — it just lists the names.