Netflix Allows Users To Tone Down Their Sharing 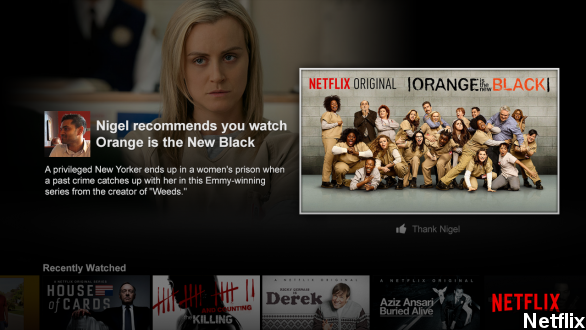 SMS
Netflix Allows Users To Tone Down Their Sharing
By Erik Shute
By Erik Shute
September 2, 2014
Netflix delivers a new way to share what you're watching on Facebook. Users can send recommendations to their friends without posting publicly.
SHOW TRANSCRIPT

Netflix is reintroducing users to Facebook sharing and recommendations but with a touch of much-needed discretion.

Now its users can share "Orange Is the New Black" and other favorites directly to their Facebook friends without posting publicly. Here's how:

Essentially, Netflix knows friends are talking about its shows and it wants to keep that conversation going online. So far, condensing the circle of friends has been met with a thumbs up from the media.

In an interview with the site, Director of Product Innovation Cameron Johnson says the update restores "watercooler" talk about Netflix.

"We're trying to emulate the way people talk in their real lives. With linear TV, everyone watches big events at the same time. With on demand, people watch at their pace on their own screens."

The service works by not automatically sharing every show a user watches. Instead, at the end of the show, Netflix will prompt a user to recommend the show to a Facebook friend or multiple friends.  As a bonus, these private recommendations will never clog a user's news feed like before.

Fast Company notes this move comes on the heels of Facebook's crusade against spam and clickbait invading news feeds. It's already tweaked its algorithm to deprioritize posts deemed less than desirable.

A few years ago, Netflix actually fought to bring this feature to its now 50 million subscribers. In 2013, the service convinced a court it should allow users to post what they're watching to Facebook. The courts originally said Netflix violated a 1988 law that forbids any service to keep a record of video rental history.

That law was established back when VCR tapes were hot rentals. Since then, everything and everyone is online. So Netflix made a case people should be able to opt in to share on social media, and the courts allowed it.