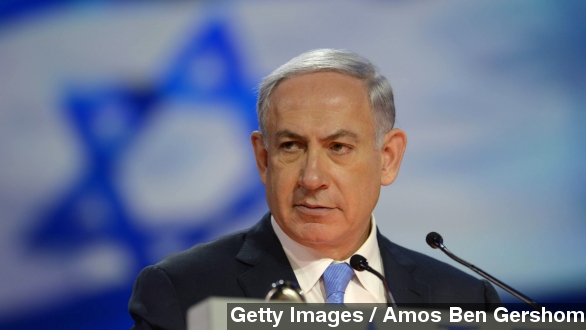 SMS
Netanyahu Tries To Woo Right Wing As Voters Head To Polls
By Steven Sparkman
By Steven Sparkman
March 16, 2015
Tuesday is election day in Israel as current prime minister Benjamin Netanyahu tries to stave off a challenge from the center-left bloc.
SHOW TRANSCRIPT

Tuesday is election day in Israel as current prime minister Benjamin Netanyahu tries to stave off a challenge from the center-left bloc.

Polls haven't looked particularly favorable to the PM even since he called for elections in December.

So it shouldn't be a surprise that he took some extreme measures heading into the final days of the campaign.

In a much-reported interview with an Israeli news site Sunday, Netanyahu said if he retains his seat as prime minister, he'll fight to prevent the creation of a Palestinian state.

He argued that a Palestinian state would immediately fall to extremists, becoming a threat to Israel's existence.

It's a familiar refrain from the pro-Bibi camp.

"You have an incredible country, and we want to keep it that way. That’s why it is so important that you keep a leader who has the courage and vision to stand up against the evil forces that are threatening not only Israel but the United States," said actor Chuck Norris.

It also represents a change from a 2009 speech in which the prime minister announced some limited support for a Palestinian state.

Netanyahu's comments are being called a not-so-subtle attempt to appeal to his country's right-wing voters by citing the threat of Islamic extremism. But he's also invoked a different specter: foreign governments meddling in Israel's affairs.

Netanyahu accused Scandinavian governments of spending millions of dollars on an ad campaign against him, but it turns out there might be a bigger culprit.

"Fox News learning a U.S. Senate committee is about to look into whether the Obama administration possibly helped fund an effort to defeat Israeli Prime Minister Benjamin Netanyahu."

The accusations concern the Victory 15 campaign, a group dedicated to getting the prime minister out of office, whose parent company received $350,000 in State Department grants.

So far there's no direct link between the administration and the anti-Netanyahu group, and the prime minister himself hasn't accused the U.S. of meddling, but he did say the influx of foreign money into the campaign against him was unprecedented.