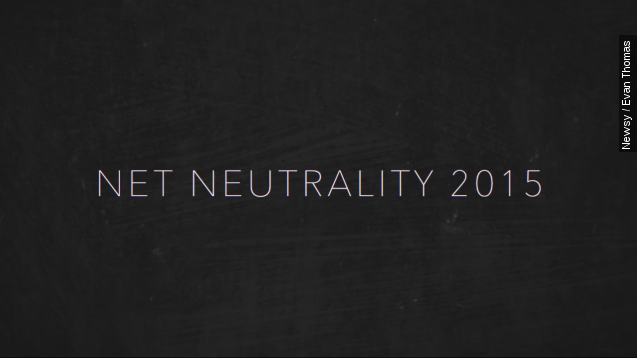 SMS
Net Neutrality 2015: A Long And Still Undecided Battle
By Evan Thomas
By Evan Thomas
December 22, 2015
Regulators, lawmakers and the ISP industry have fought over net neutrality all year, and they're still not done.
SHOW TRANSCRIPT

"All in favor say aye. Opposed? The ayes have it, the motion carries," said FCC Chairman Tom Wheeler. (Video via C-SPAN)

It's been a trying year for net neutrality. The FCC's new policies prevent ISPs from blocking, throttling or prioritizing paid traffic over their networks: All data must be treated equally.

But numerous groups challenged these laws as soon as they were enacted, and the pushback still hasn't let up.

It was enough that FCC Chairman Tom Wheeler had to bring it up for cable industry representatives assembled at the Internet and Television Expo.

"Your challenge will be to overcome the temptation to use your predominant position in broadband to protect your traditional cable business. The Internet will disrupt your existing business model. … It has done that to everyone," Wheeler said. (Video via C-SPAN)

But the pushback kept coming: from AT&T in May and from a coalition of providers in July who argued broadband is an "information service" rather than "telecommunications," because it uses "computer processing."

So far, the FCC has stood its ground. Not that Capitol Hill is making it any easier.

In April, Republican lawmakers proposed changes to the FCC's rule-making process that would slow down its oversight to the point of ineffectiveness.

Wheeler blasted it, "Delay is only in the interest of those benefiting from the status quo." (Video via House Energy and Commerce Committee)

The House Appropriations committee tried to cut the FCC's budget in June and delay enforcing the stricter title II rules until outstanding court cases were resolved.

An appeals court rejected a stay that would have protracted those cases, and the White House criticized the "unnecessary" and "costly" budget proposals.

In November, Republicans tried again. They threw their support behind the telecom trade groups currently fighting it out in court ...

and added riders to early versions of the government's budget that would have prevented the FCC from regulating ISP data caps or fees.

Meanwhile, providers are trying new things under net neutrality, like zero-rating. For example, T-Mobile and Comcast offer free content through their data services that doesn't count against monthly data caps. Verizon is set to follow suit. (Video via T-Mobile)

The FCC is watching closely. In December, it sent letters to zero-raters asking them to explain their rationale and address consumer concerns.

The FCC says it will step in if it has to. Same goes for the no-unreasonable interference standard that it would apply to data caps.

Oh, yeah: Comcast says it intends to expand those caps to more customers next year. (Video via Fortune)

Despite the kicking and screaming, one bit of the FCC's rule-making does appear to have worked as intended.

ISPs complained the new rules would stifle investment, but that wasn't the case as many of them saw higher capital expenditures this year.

The broader fight over net neutrality, meanwhile, grinds on in the courts. Judges for the D.C. Court of Appeals heard from cable trade groups suing over the FCC's regulations on Dec. 4.

The case is expected to eventually escalate to the Supreme Court, so look forward to that sometime next year.