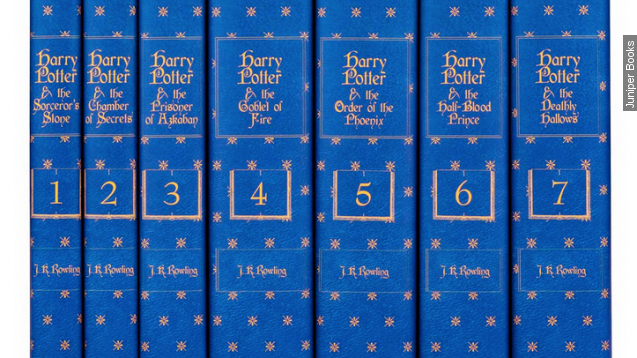 By Cody LaGrow
September 17, 2015
A book cover that had the wrong symbol for the Ravenclaw house made "Harry Potter" fans cast a spell for change.
SHOW TRANSCRIPT

It's a magical mistake that stopped "Harry Potter" fans in their tracks. (Video via Warner Bros. / "Harry Potter and the Sorcerer's Stone")

Juniper Books released this new set of Hogwarts house-themed book covers for $275, each house reppin' its colors and mascots. Red and gold for Gryffindor, green and black for Slytherin, a badger for Hufflepuff ... and a raven for Ravenclaw?

Despite its name, the correct bird that officially represents Ravenclaw is an eagle. And Harry Potter fans worldwide treated the misrepresented book cover exactly like a horcrux. (Video via Warner Bros. / "Harry Potter and the Half Blood Prince")

As a united front, these wannabe wizards sought to destroy the cover. But since they couldn't take a basilisk fang to this Colorado-based publisher, Time reports the publisher received enough complaints from fans that it's going to change the cover. (Video via Warner Bros. / "Harry Potter and the Half-Blood Prince")

The new cover now features a soaring eagle that would make any Ravenclaw proud.

So, well done, all you Hogwarts hopefuls. Your acceptance letter may not have come this year, but consider applying at Flourish and Blotts. Books are so your thing. (Video via Warner Bros. / "Harry Potter and the Deathy Hallows")