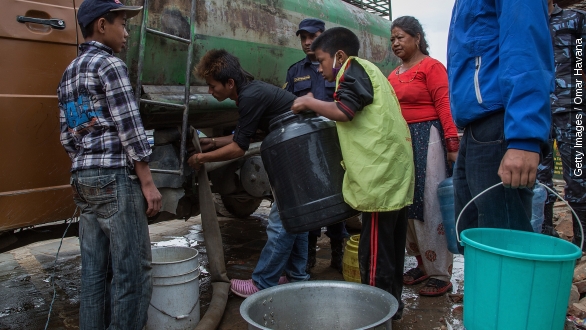 We're learning more about the devastating effects of the 7.8 magnitude earthquake that struck Nepal on Saturday.

Nepalese officials have placed the death toll at more than 5,000 people, while the powerful quake has also affected an estimated eight million across the country.

Relief efforts are still underway, as officials begin to turn their attention toward smaller villages within Nepal. But Fox News reports many of those efforts have been hampered by other natural disasters in the area.

The outlet quotes one rescue worker who became trapped while trying to deliver food. "This rain has caused a landslide that has blocked my trucks. I can maybe get one truck through and take a risk driving on the dirt, but I think we'll have to hold the materials back to try to get them out tomorrow by helicopter."

And the death toll is expected to rise once officials arrive in remote villages, some of which have been described as "thoroughly destroyed," and "flattened."

The Washington Post quotes a rescue coordinator who says "70 percent of the deaths so far have come in these rural areas."

The Guardian — which is keeping a running report of the incident — says thousands are leaving the Nepalese capital of Kathmandu because "they fear epidemic outbreak and earthquake aftershocks." The outlet reports more than 100,000 people have already left the city.

The country's leadership has admitted to missteps in handling relief efforts, but appear to be working to correct the mistakes. Nepal's foreign secretary has called for assistance from search and rescue teams, as well as medical professionals. (Video via Sky News)

Several countries across the world have rushed to provide support to the region. And internationally, individuals are doing the same. Time has put together a list of charities providing earthquake relief in Nepal with instructions on how to donate to each.