Nemtsov Is Just The Latest Putin Critic To Be Silenced 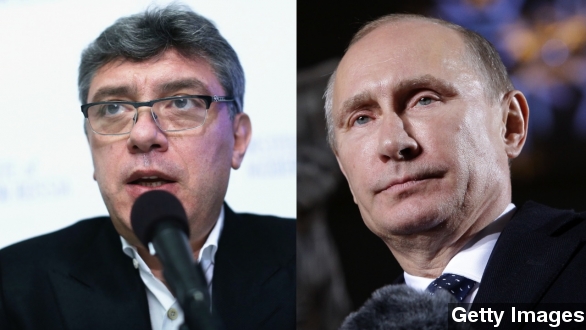 SMS
Nemtsov Is Just The Latest Putin Critic To Be Silenced
By Jake Godin
By Jake Godin
February 28, 2015
Critics of Russian President Vladimir Putin have a history of either being killed or forced to flee their homeland — Boris Nemtsov is just the latest.
SHOW TRANSCRIPT

What happens to Putin’s enemies? (Video via The Kremlin)

Prominent Russian opposition leader Boris Nemtsov told a Russian weekly on Feb. 10 his mother feared Russian President Vladimir Putin would have him killed for his harsh criticism of the leader.

Two weeks later, he was murdered in the streets of Moscow.

The Kremlin quickly denounced the murder, saying it has “all the markings of a contract hit and is extremely provocative.”

President Putin praised Nemtsov in a telegraphed message to his mother Saturday, calling him open and honest. In a separate statement, Putin said he’ll personally head the investigation into Nemtsov’s murder. (Video via The Kremlin)

When asked if the Russian government had any hand in the murder, Kremlin spokesman Dmitry Peskov told the BBC even asking the question was nonsense.

“But is the answer no? No one in the Kremlin ordered this killing or had anything to do with it?” a BBC reporter asked Peskov in a radio interview.

“The answer is no, but I better not answer this silly question,” Peskov replied.

But not everyone is convinced, in part because Nemtsov is only the latest in a long line of Putin critics to be silenced.

Anna Politkovskaya, a journalist and strong critic of Putin over Russian involvement in Chechnya, was killed in 2006 inside her apartment in Moscow. (Video via Voice of America)

After surviving what she believed was an attempt by the Kremlin to poison her, Politkovskaya wrote for The Guardian in 2004, “If you want to go on working as a journalist, it's total servility to Putin. Otherwise, it can be death, the bullet, poison, or trial - whatever our special services, Putin's guard dogs, see fit.”

Alexander Litvinenko, a former KGB agent and journalist living in exile in London died in 2006 after being poisoned by radioactive polonium-210.

Litvinenko was an active critic of Putin’s administration and shortly before his own death accused the Russian president of ordering Politkovskaya's assassination.

“And I can directly answer you, it is Mr. Putin, the President of the Russian Federation who has killed her,” Litvinenko said.

Stanislav Markelov, a Russian human rights lawyer and Anastasia Baburova, a journalist were both murdered in broad daylight by an unknown assassin in Moscow in 2009

Markelov represented Chechens in human rights abuse cases against Russia, while Baburova was an intern at the same newspaper as Politkovskaya, Novaya Gazeta. (Video via Grani.Ru)

Former oil tycoon and Russian exile Mikhail Khodorkovsky spent 8 years in a Siberian labor camp on charges of fraud and tax evasion — charges largely seen as politically motivated. Once freed in 2013, he fled to Switzerland. (Video via Deutsche Welle)

This is only a handful of names of people who’ve either been killed or forced to flee Russia assumedly because of unfavorable views toward the Kremlin.

While not all of the people we’ve mentioned are journalists, The Committee to Protect Journalists rates Russia as having the 9th worst record of impunity regarding journalist deaths. Murders are rarely solved, and if they are, whoever ordered them is never uncovered. (Video via ATR)

Quartz’s Washington correspondent says that’s because of the “interwoven nature of criminality and Russian officialdom. … No Russian gang will carry out the murder of a high-profile figure absent a signal of approval from senior levels of government.” (Video via The Kremlin)

With Nemtsov’s death, Buzzfeed’s Max Seddon says its harder than ever to imagine a Russia where that kind of criminality will change. (Video via Euronews)

A March 1 opposition rally Nemtsov was planning has been canceled. Instead, organizers have planned a demonstration to mourn the death of Nemtsov in central Moscow.