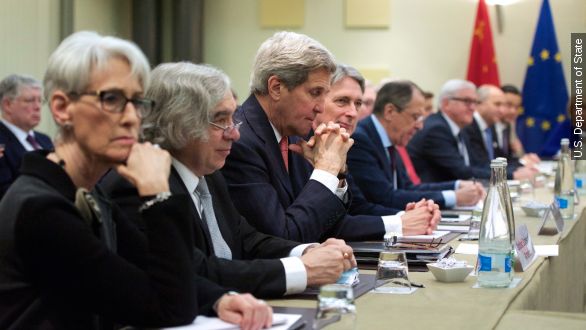 Negotiators working on an Iranian nuclear deal have given themselves another day. (Video via Voice of America)

Top diplomats from Iran, the U.S. and five other world powers were in Lausanne, Switzerland, this week to hash out a framework deal that would curb Iran's nuclear ambitions. (Video via Press TV)

They'd given themselves a deadline of midnight Tuesday. They now have until Wednesday.

Iran's supreme leader has been saying all along, the only deadline that matters is the deadline for a full-fledged, final agreement in June. (Video via Office of Supreme Leader)

And to some degree, that's true. If negotiators don't reach a deal Wednesday, nothing changes. Iran will continue operating its nuclear program as is. The more significant date is April 14 when Congress returns from its Easter break.

Lawmakers have threatened to move forward with a fresh round of sanctions on Iran.

President Obama has vowed to veto any sanctions levied while the diplomatic process is still underway.

"I will veto any new sanctions bill that threatens to undo this progress." (Video via The White House)

Another consideration: This bipartisan Senate bill is scheduled to get a vote in committee when Congress returns.

It requires Congress have a say on any future nuclear deal the administration reaches with Iran.

"Congress can either approve, disapprove or take no action at all," said Sen. Bob Corker, R-Tenn.

When negotiators meet again Wednesday, they'll have plenty to discuss. Among the unresolved issues: how much nuclear research and development will be allowed, and how soon will sanctions be lifted.