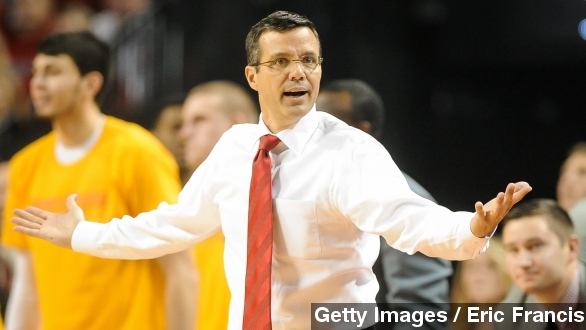 SMS
Neb. Basketball Coach Locks Team Out Of Locker Room
By Matt Moreno
By Matt Moreno
February 23, 2015
A frustrated Tim Miles barred his players from their locker room after their performance against the University of Iowa on Sunday.
SHOW TRANSCRIPT

It's safe to say Nebraska's men's basketball coach Tim Miles isn't lobbying for most popular coach of the year from his players.

Coach Miles is locking his players out of their own locker room. Nebraska's $19 million basketball locker room was opened in 2011 and features pretty sweet amenities like a smoothie bar, a pool table, big TVs and iPod hookups in the shower. (Video via University of Nebraska)

"If you lose five games in a row and seven of the past eight, you'll be grounded. These nice things will be taken away. Head coach Tim Miles did just that," an ESPN reporter said.

Miles said there will be chains on the locker room doors and players won't be available to the media for the foreseeable future.

The team is not having a great year and fell to 13-14 for the season after a loss to Iowa on Sunday. The Cornhuskers made it to the March Madness tournament last year.

And midway through the game, you could tell Coach wasn't going to be happy afterward if things kept going the way they were going.

So if they want those heated towel racks back, they have some work to do. Clearly, extra wind sprints just aren't cutting it.