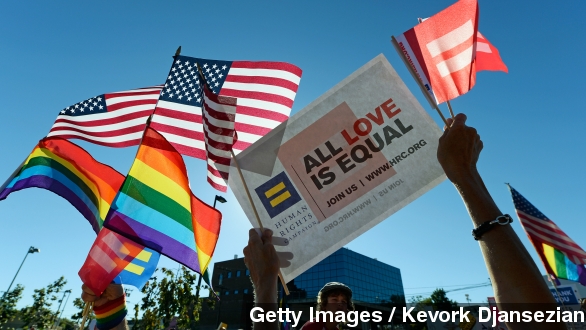 SMS
Nearly 400 U.S. Companies Back Gay Marriage
By Danny Matteson
By Danny Matteson
March 6, 2015
Almost 400 of the biggest U.S. companies signed on to a friend-of-the-court brief urging the U.S. Supreme Court to rule in favor of gay marriage.
SHOW TRANSCRIPT

Gay marriage as a cause has made significant strides the last two years, and as of Thursday it has a new backer — big business.

On Thursday 379 of the U.S.' biggest companies — everyone from Apple to Amazon to General Electric to Coca-Cola — signed on to a friend-of-the-court brief urging the U.S. Supreme Court to rule in favor of gay marriage. (Video via CBS, WFTS)

As the Supreme Court's blog explains, a friend-of-the-court brief — also known as an amicus curiae brief — is "filed by a person, group, or entity that is not a party to the case but nonetheless wishes to provide the court with its perspective on the issue before it."

The perspective in this case? Allowing gay marriage is good for business.

The U.S. Supreme Court announced it would consider gay marriage ban cases from four states back in January — finally putting the national debate on track for a decision. On Thursday, it set oral arguments for April 28. (Video via MSNBC)

Currently, gay marriage is legal in 37 states with an ongoing legal battle between federal courts and the state Supreme Court unfolding in Alabama.

The Supreme Court already struck down the Defense of Marriage Act in June of 2013. That decision allowed benefits to married gay couples and some believe opened the floodgates on a wave of decisions legalizing gay marriage in dozens of states. (Video via WFTS, ABC)

The Supreme Court is expected to rule on the current case by late June.

This video includes images from Getty Images and music from Skill Borrower / CC BY NC Sampling Plus 1.0.