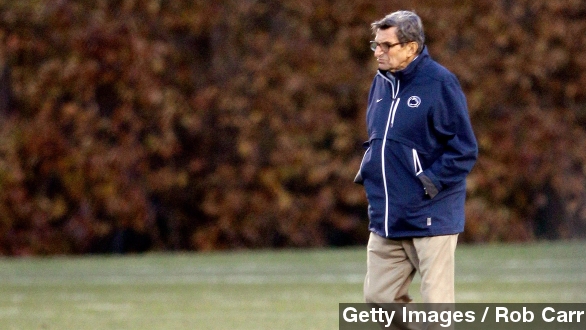 As expected, the NCAA is rolling back the penalties it placed on Penn State University as punishment for the Jerry Sandusky child-molestation conviction.

That gives the more than 100 wins the association vacated back in 2012 back to former Penn State football coach Joe Paterno, once again making him the winningest coach in college football. (Video via WHVL)

We knew this was coming. Earlier this week a report in The Philadelphia Inquirer said the NCAA was considering revising penalties imposed on Penn State University.

Paterno was stripped of a fourth of his wins from a 14-year span of his career in 2012.

That came after child sex-abuse charges were brought against former assistant coach Jerry Sandusky. Sandusky was convicted in 2011. (Video via ABC)

Days later, Paterno, who was not charged with a crime, was fired by Penn State for allegedly turning a blind eye to the abuse. He died weeks later from lung cancer.

Originally, the NCAA fined the school $60 million, banned the team from postseason play for four years, reduced scholarships, vacated JoePa's wins dating back to 1998 and placed the school on probation.

The NCAA has reduced parts of the sentence throughout the years, though, giving back scholarships in 2013 and allowing the Nittany Lions to return to postseason play in 2014.

The NCAA has cited massive improvements made by the school as reasoning for the scaled-back punishments.