NCAA Sanctions Are Nothing New For Larry Brown, SMU 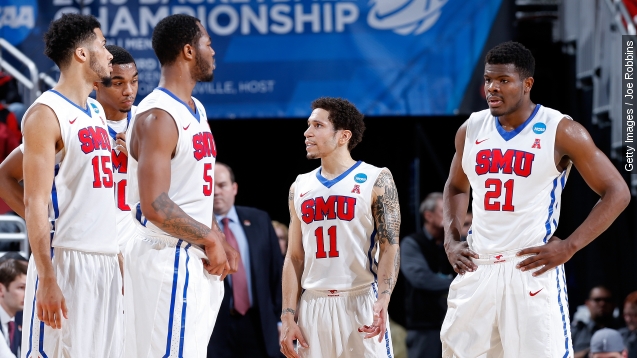 The NCAA has announced harsh sanctions against Southern Methodist’s men’s basketball program, including a postseason ban for the coming season and a nine game suspension for the Mustangs’ head coach, Larry Brown.

Though the sanctions are severe, they’re hardly surprising, for a few reasons.

First, Brown has been tangled up in NCAA allegations twice before. He led UCLA to the national championship game in 1980, but that trip was later vacated due to violations. He won it all with Kansas in 1988, but faced a postseason ban from the NCAA the very next season.

Brown would move on to a successful career at the pro level, winning the 2004 NBA title with Detroit. He was named a Basketball Hall of Famer in 2002.

And the NCAA has been coming down hard on head coaches recently.

In March it suspended Syracuse head coach Jim Boehiem for nine conference games and vacated over 100 wins from his resume for failing to monitor the program which had committed numerous violations since 2001.

On top of that, SMU is no stranger to harsh NCAA penalties. In 1987 the school’s football program was charged with violations so severe the NCAA enacted the so-called “death penalty,” shutting down the football program for a year.

This was a factor in the basketball team’s suspension, according to the NCAA’s report.

The sanctions come at a tough time for SMU’s program, which had experienced a renaissance after Brown’s hire in 2012.

The school undertook a $47 million renovation for its basketball arena, completed in 2013. And last year, the Mustangs went to the NCAA tournament for the first time since 1993.

There’s a chance SMU could appeal the NCAA’s decision, though, and ESPN’s Jeff Goodman says a lengthy appeal process could be an intriguing option for the Mustangs, who have lofty expectations for their team this year.

“They’re a top-25 team, Larry Brown’s 75 years old, so if they do appeal, this thing could drag out through maybe March or April, Larry Brown gets to coach this year, and then maybe he steps down,” Goodman said in an interview Tuesday.

If not, Brown would be tasked with motivating a team to perform despite having no postseason reward — a tall order, considering he won’t be on the bench for 30 percent of his team’s games.