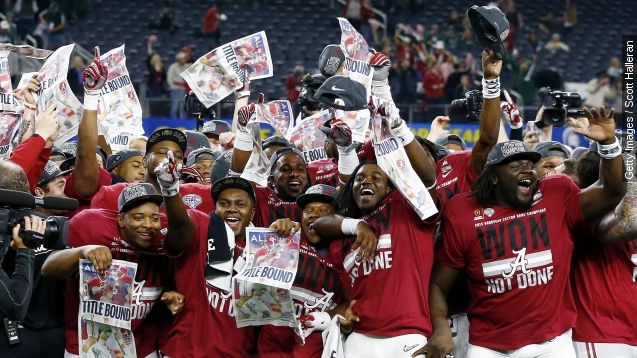 With just days to go until college football’s national championship, Clemson and Alabama are preparing to square off for the title. But when Jan. 11 rolls around, the Crimson Tide will likely be much more prepared, thanks to the NCAA.

The NCAA’s 20-hour rule says that "athletically-related activities may occur not more than 20 hours per week, with a maximum of four hours per day."

But that rule only goes into effect once classes start. At Clemson, the spring semester, and the tightened practice schedule, begins Jan. 6. (Video via Clemson University)

But the Crimson Tide won’t roll into class until Jan. 13, two days after the title game. So Bama can practice all they want. And, knowing Alabama coach Nick Saban, that’s going to be a lot. (Video via University of Alabama)

With all the different plays and formations coaches will want to add, the practice disparity gives a huge advantage to Alabama who’s already favored by a touchdown, according to ESPN.

And this is an advantage we saw firsthand during last year's championship game. The Ohio State Buckeyes enjoyed a longer winter break, and therefore more practice time, than the Oregon Ducks. The Buckeyes rolled to a 42-20 victory.

But Ohio State coach Urban Meyer downplayed the rule before the national championship game, saying he didn’t want to push his players too hard at the end of a long season. (Video via CBS)

He told Bleacher Report: "That 20-hour thing? Yeah, we were way below that. … Don’t re-practice things you don’t have to re-practice because you’re just wearing them out."

While Meyer may not have used his advantage, it still seems unfair that one team could have that option. But the playoff is still new, and despite the kinks that need to be worked out, it’s still a big improvement from the BCS.