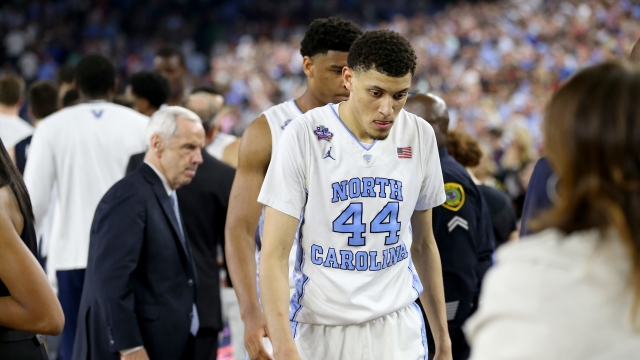 By Grant Suneson
September 13, 2016
The NCAA is pulling all championship events from North Carolina over the state's controversial bathroom bill.
SHOW TRANSCRIPT

The NCAA announced it's relocating all of this school year's championship events that were set to be played in North Carolina. There were seven events scheduled, but the biggest loss is college basketball.

In case you're not a college sports fan, North Carolina loves college basketball. The state has hosted more NCAA men's basketball tournament games than any other.

Schools in the state also happen to be pretty good. Either Duke, North Carolina or N.C. State have made the NCAA tournament every year since 1974, and they've brought home a dozen national titles.

Greensboro was set to host first and second round tournament games next March, and there's a good chance they would've been de facto home games for either Duke or North Carolina.

The NCAA gives higher seeded teams opening games that are close by. North Carolina and Duke are both in the top 10 in preseason rankings, so there's a good chance one of the schools would've played in Greensboro.

That means the state is missing out on millions of tourism dollars from fans. Greensboro's mayor said the city will lose at least $17 million, calling the decision a "man-made recession."

The North Carolina GOP was predictably upset with the move. Its spokeswoman said the decision was "so absurd it's almost comical" and "an assault to female athletes across the nation."

Despite the evidence, state Republicans argue gender-inclusive restrooms pose a danger to women. NCAA president Mark Emmert said the decision is all about "providing a safe and respectful environment at our events."

Interestingly, the Belk Bowl is still scheduled to be held in Charlotte in December. The NCAA doesn't actually run football bowl games, but it does have to certify each one. It could choose to decertify the game, but an industry insider told ESPN that doesn't seem likely.