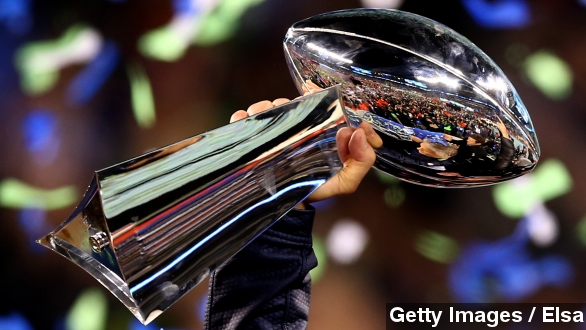 We're mere days away from someone claiming this trophy, and there doesn't seem to be anything "first" about Super Bowl XLIX.

Football's biggest game of the year pits the team that won it last year against the team that seems to make it to this game every year.

But NBC, the network getting its turn in the broadcast rotation to air this year's game, says it'll try something new.

NBC announced Tuesday plans to stream the Super Bowl, including more than six hours of pregame coverage, the halftime show and the postgame celebration in what it's calling "Super Stream Sunday."

To be fair, this isn't a "first" on a groundbreaking level since NBC was the first to stream Super Bowl XLVI three years ago when the network said it drew 2.1 million streaming viewers.

But if you were hoping to see pregame analysis or Katy Perry's midgame performance on your desktop or tablet, you finally can. Coverage for pregame, the halftime performance and postgame has never been available for streaming until this year. (Video via Capitol Records / Katy Perry)

The NFL is doggedly protective of its exclusive, lucrative content. Companies pay huge premiums for rights, like Verizon's latest $250 million per-year contract to stream games, which is why the NBC content won't be available on smartphones. (Video via Verizon)

There's no word at this point whether NBC had to pay extra to stream the halftime content.

Not surprisingly, NBC decided to extend the live-streaming window by an hour after Super Bowl coverage ends to include the midseason premiere of "The Blacklist."

You'll notice a week and a half before the game, the top story on NBC Sports Live is already about Super Bowl XLVI. You can also stream the game by downloading the NBC Sports Live app on your tablet.