NBC's Big Bet On Live Is About More Than Mass Appeal 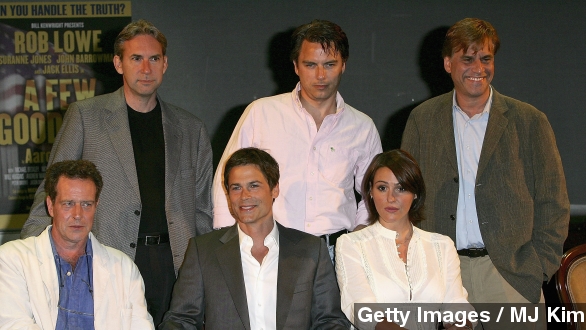 SMS
NBC's Big Bet On Live Is About More Than Mass Appeal
By Lauren Zima
By Lauren Zima
November 7, 2014
NBC might air a live staging of a "A Few Good Men." Why is the peacock network all about "live"?
SHOW TRANSCRIPT

They say all that is old becomes new again, and that's looking more and more like NBC's new motto.

According to Variety, the peacock might air a live version of "A Few Good Men."

"You can't handle the truth!" (Video via Columbia TriStar / "A Few Good Men")

Yes, it was a hit movie, but the story was a play by Aaron Sorkin before that.

Variety says Sorkin will rework the play a bit for TV staging.

About a year ago, NBC netted roughly 20 million viewers with its live version of "The Sound of Music."

But really, what many have cited for the success here is mass appeal. These are family-friendly shows, and it's a one-night commitment — a TV event for the whole family.

"A Few Good Men" would be less so. It's about a killing, and the movie was rated R.

This seems to indicate NBC is betting big on live shows — proving it's willing to move beyond just mass-appeal productions.

"A Few Good Men" seems a safe way to take a step into more niche works. While it is geared toward adults, the movie was a success — making almost $250 million worldwide and earning Oscars noms.

The same producers behind "Sound of Music" and "Peter Pan" are involved. And it was just Oct. 7 news hit that NBC Entertainment Chairman Bob Greenblatt would give new focus to live stage productions.

He said in a statement: "Broadway and the touring business are very robust right now."

Yes, money talks — whether live or prerecorded. The same day, Variety reported NBC was looking to get $350,000 an ad for "Peter Pan," promising advertisers viewers wouldn't be able to skip ads.

That's one of the biggest asks of the fall TV season.

And it's good news for NBC when its longest-running live show, "Saturday Night Live," isn't doing so hot ratings-wise.

So, it's not just about "live" — it's about beloved stories in a different format. Audiences know the story, but it's been given a face-lift.

And it's not just NBC — just as we heard about "A Few Good Men," news broke that "The Hunger Games" would be turned into a live musical for the stage.

It's all not unlike what Disney did back in 1997 for "The Lion King" — hit movie brought to the stage.

Call it the circle of live.