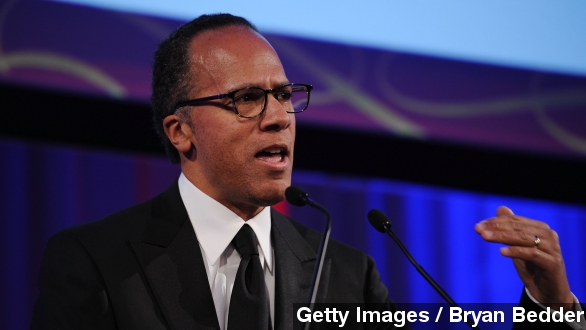 By Kate Grumke
February 18, 2015
The ratings are in for the week Lester Holt took over for Brian Williams, and NBC is still in the lead for evening newscasts.
SHOW TRANSCRIPT

Evening news ratings for the week Lester Holt took over are in, and NBC "Nightly News" is still the leader.

With Holt in the anchor seat, the newscast averaged 9.43 million viewers, which was 400,000 more than ABC and about 2 million more than CBS.

"This is NBC nightly news with Brian Williams," Williams said.

Although NBC is still in the lead, viewership was lower than Brian Williams' last week before his suspension. NBC averaged 10.2 million viewers that week.

"I want to apologize, I said I was traveling in an aircraft that was hit by RPG fire. I was instead in a following aircraft." Brian Williams said.

That controversy led to Williams losing his lofty ranking as a highly trusted American, falling from 23rd to 835th.

Now winning back trust will be the focus at NBC, according to a formal apology during its newscast.

"Brian is a member of our family but so are you, our viewers, and we will work every night to be worthy of your trust," Holt said.

Holt has been at NBC since 2000, and after two years of filling in for Williams, he now has the anchor seat for the next six months while Williams is on leave.