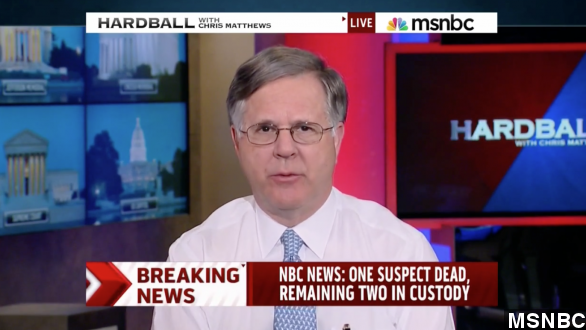 In the wake of disaster, the scramble to break news first will inevitably lead to some media outlet embarrassing itself with a bad report. For the Charlie Hebdo massacre, that outlet was NBC.

Three gunmen attacked the offices of satirical magazine Charlie Hebdo on Wednesday, killing 12 people and wounding 11 more. As of Thursday, police say one of the suspects turned himself in while two others remain at large.

But on Wednesday afternoon, NBC's Pete Williams reported one suspect had been killed and two others arrested.

Williams told MSNBC viewers: "What we're told by several U.S. officials is that this did end. ... One was killed; the other two are now in custody."

Williams began to walk back his initial report several hours after it went live, saying the faulty information came from "two senior U.S. counterterrorism officials" who "later said the information that was the basis of that account could not be confirmed."

When Rachel Maddow asked Williams, "Pete, what do we know?"

He responded, "OK, well, that is a fraught question, it turns out, because it's been a day of rapidly changing information."

And on Thursday, after it was fully apparent the report was false, an NBC spokesperson told Politico the network would issue a full correction during its Thursday night broadcast.

The error is particularly troubling coming from Williams, who has been commended in the past for diligent, even-keeled reporting in breaking news situations.

During the Boston Marathon bombing manhunt, when other outlets inaccurately reported a suspect had been arrested, Williams famously rejected those reports in favor of his own sources.

Here's a look at Williams on NBC: "What we've been told by several sources is that there is no arrest."

Mediaite's Joe Concha notes Williams' flub is a reminder that when it comes to breaking news, "Nobody's infallible. Even an old pro like Pete Williams."

A massive manhunt is currently underway in northern France for two brothers, Said and Chérif Kouachi, who are the prime suspects in the attack.