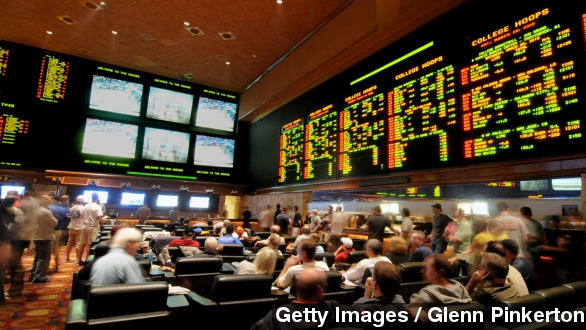 Widespread sports betting just got a surprising ally: the man in charge of one of the leagues that's fought so hard to keep sports books squarely in Vegas.

SILVER: "I believe that sports betting should be brought out of the underground and into the sunlight where it can be appropriately monitored and regulated."

Silver — the man whose bold moves in such a short time on the job include a new league-wide TV deal and getting rid of Clippers owner Donald Sterling — says keeping sports betting illegal simply encourages illegal activity. (Video via KCBS)

It's hard to argue. Sports betting is common abroad, and Silver noted some estimate U.S. gamblers risk $400 billion a year on games — skirting the legal confines of a Vegas sports book, whether online or through a bookie. (Video via Levy Productions)

RACHAEL LEIGH COOK IN "BOOKIES": "It's not just the NCAA investigating; it's the FBI."

... or dark subplots for cable shows that likely represent a more real impact on the addicted sports gambler.

GAMBLER ON TNT'S "MEN OF A CERTAIN AGE": "Let me have Kentucky. I have a good feeling about this one."

Only two months ago, New Jersey Gov. Chris Christie announced the state would no longer prosecute casinos and racetracks for accepting bets on professional sporting events, a move Silver wrote "will be both unlawful and bad public policy" without a better federal solution.

While Time called this a "radical change" in the NBA's position, Silver has flirted with the concept in recent months.

SILVER ON BLEACHER REPORT: "I do think sports betting on a widespread, legalized basis is inevitable."

Among the moves Silver called for: monitoring unusual betting line movements and ways to ID and help people with gambling problems.