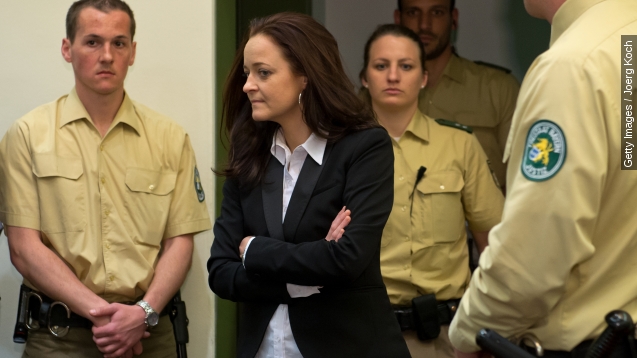 The woman accused of being a part of a neo-Nazi terrorist cell in Germany broke her silence in court.

Beate Zschaepe has been called the "Nazi Bride." Authorities say she's the only surviving member of the National Socialist Underground, a group accused of being involved in the deaths of 10 people, two bombings and 15 bank robberies.

Zschaepe said in a written statement she "was involved neither in the preparations, nor in the carrying out" of the killings but that she felt "morally guilty" about not being able to stop it.

The case has been a controversial one for German authorities. Police initially believed the killings were carried out by migrant criminal gangs.

Officials were unaware of the of the neo-Nazi group until they found a gun linked to the killings at the scene of a double suicide involving two of the group's members.

Zschaepe said she felt like she couldn't leave the group and was financially and emotionally dependent on the other members. If convicted, she could face a life sentence.